There is organized the book exhibition for the 70-th birthday of the honored architect of Kazakhstan, the People’s architect of the USSR Kaldybai Zhumagaliuly Montakayev (1950-2008).

There in the reading hall of the “Arts” department is organized the book exhibition for the 70-th birthday of the honored architect of Kazakhstan, the People’s architect of the USSR Kaldybai Zhumagaliuly Montakayev (1950-2008). 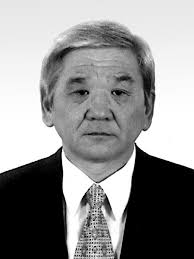 K.Montakayev was born on January 15, 1950 in the Republic of Altai (Russia). He graduated from the faculty of architecture of the Kazakh polytechnical institute in 1972 (today the Kazakh  National technical-research university after K.I.Satbayev). in 1982-1996 – chief architect of

the studio; in 1996-2000 – President of the Architects’ Union of the RK; from 2000 the chairman of the council of directors of the JSC “Almatygiprogor”. He was the head of the of the group of authors of the following projects: the 12-floor experimental residential building in Almaty (1976), the building of the Central Committee of the Communist Party of Kazakhstan (1980); Presidential palace (1985); the Republican square complex; several big construction sites in the “Ainabulak”, “Aksai”, “Orbita” micro-districts, also the cultural centre of Kazakhstan in the city of Moscow (1986).

K.Montakayev made the projects of the Presidential residence, the houses of the Government and the Parliament, several Ministries, the Congress-hall, the airport and the bus-terminal, the central universal shop in the city of Nur-Sultan and also in Nur-Sultan the project of the memorial monument for the political victims. Selected as academician of the International academy of architects (in Moscow city), vice-president of the Academy of architects of the Oriental countries.

The winner of the State prize of the USSR (1982), the diploma-holder of the international competition of the Akropol museum complex in the city of Athens, the winner of the world Biennale festival (1989, 1990).

There in Pavlodar for the honour of the future Kazakh architect Kaldybai Montakayev on the wall of the regional gymnasium-boarding school after Y.Altynsarin for gifted children was established the memorial plate.

There at the book exhibition out of the fond of the book and periodical editions of National library of the RK are offered the materials about the life and activity of Kaldybai Montakayev.

You are invited to the book exhibition!

We have 250 guests and no members online