There took place the ribbon-cutting ceremony of the book-album “Eldar Ismailov in Kazakhstan”. 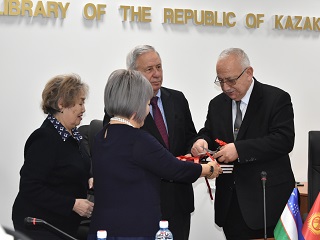 The solemn activity was opened by the scientific secretary of National library of the RK, member of the Writers’ Union of Kazakhstan Bolat Zhunisbekuly Zhunisbekov.

There at the activity “Eldar Ismailov in Kazakhstan” the author of the book-album, public activist, publicist, writer Kenzhina Nasikha Gumarkyzy expressed gratitude to the guests of the evening and also expressed good wishes to Ismailov Eldar Ismailuly.

Also there during the activity the member of the presidium of the World congress of Azerbaijanis, the holder of “Golden pen” Eldar Ismailov, professor Gyunaidyn Eldar and some others expressed their opinions about the book-album “Eldar Ismailov in Kazakhstan”.

During the ribbon-cutting ceremony the dancers danced to the playing of the dombra and thus entertained the guests.

There in the activity participated the students, readers, workers of the library and readers, honorary audience and mass-media representatives.

We have 195 guests and no members online