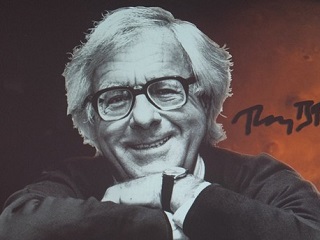 There in the hall of world literature is organized the book exhibition, dedicated to the centenary of the American writer Ray Douglas Bradbury.

Ray Douglas Bradbury is the well-known American writer, was born on August 22, 1920 in the city of Wakigan (the state of Illinois, USA).

In 1934 the family of Bradbury moved to Los-Angeles, settling down with the uncle of the boy. After finishing school the young man worked as the seller of newspapers. The family didn’t have money for the continuation of the studies. Ray didn’t get higher education. The boy decided to become a writer.

Bradbury’s first publication was the verses “In memory of Will Rogers” published in the Wakigan’s newspaper in 1936, and in 1937 he entered the Los-Angeles “League of scientific fantasts”, after which he began to be published in the magazines.

In 1947 there saw the light the first collection of stories of the writer “The dark carnaval”. There into the collection entered the works of the 1943-1947 period. The world acknowledgment Ray Bradbury achieved with the publication in 1953 of the novel “451 degrees Fahrenheit”.

The plot of the novel narrates about the consumer totalitarian society. The writer showed the society which as the main goal set the acquisition of material goods. The screening of “451 degrees Fahrenheit” in 1966 was made by director from France Francois Truffo. In 1957 there saw the light the partially biographical novel “The wine from dandelions”. This short novel of Bradbury does not resemble the other works. In it there is touched upon the child’s experiences of the author.

The creative activity of the writer is inseparably linked with the cinema and theatre. Bradbury wrote scenarios, the best-known of which is “Moby Dick”. The last novel came out in 2006. Ray Bradbury received the prizes in the sphere of fantastic “Nebula” and “Benjamin Franklin”. He is awarded with the prize of the American academy, nominated in “The hall of fame” with the prize “Prometheus” (1984). Ray Bradbury is the winner of the Pulitzer prize (2007) and the prize of Bram Stokker in the nomination “For the achievements of the whole life”. There at the Hollywood “Alley of fame” is the star of Ray Bradbury.

Ray Bradbury lived up to 91. His life was full with non-stop work. Bradbury died on June 5, 2012 in Los-Angeles.

There at the book exhibition out of the fond of National library of the RK are presented the works of the writer and the literature about him.

We have 312 guests and no members online