Оrganized the book exhibition dedicated to the 85-th birthday of the people’s writer of Kazakhstan, the poet, winner of the State prize of Kazakhstan Myrza Ali Kadyr Ginayatovich. 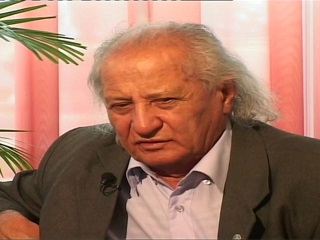 There in the reading hall of “Kazakstan kitaptary” is organized the book exhibition dedicated to the 85-th birthday of the people’s writer of Kazakhstan, the poet, winner of the State prize of Kazakhstan Myrza Ali Kadyr Ginayatovich.

Kadyr Myrza Ali was born on January 5, 1935 in the village of Zhympity of the Syrym district of the Western-Kazakhstani region. In 1958 he graduated from the philological faculty of the Kazakh state university after S.M.Kirov (today the Kazakh national university after al-Farabi).

Kadyr Myrza Ali began his labour activity in 1958 as a literary worker of “Baldyrgan” magazine, 1962-1965 – head of department, executive secretary, deputy chief editor of “Zhuldyz” magazine, in 1968-1973 head of the editorial office of poetry of “Zhazushi” publishing house, in 1973 – head of department of poetry of the Writers’ Union of Kazakhstan, in 1993 – director of “Balausa” publishing house.

The first verses of Kadyr Myrza Ali were published in 1954 on the pages of “Pioner” magazine (today “Ak zhelken”). In 1959 there saw the light the first collection of verses “Koktem” (“Spring”). He is the author of more than 50 poetical collections, literary-critical and children’s books: “Zhangalaktar” (1960), “Kishkene kozhanasyr” (1961), “Noyan-koyan” (1962), “Bulbul bagy” (1967), “Mangi maidan” (1993), “Gubratnama” (2001), “Enirep otken erler-ai” (2001), “Iyirim” (2004), “Almas zherde kalmas” (2004) and others.  Kadyr Myrza Ali is the author of the texts of approximately 200 songs. Myrza Ali made a great contribution into the development of the Kazakh children’s literature; he wrote the meaningful and gaming tongue-twisters, puzzles, fairy-tales for the children of pre-schools age. His works are translated into many languages of the world.

There at the book exhibition out of the fond of National library of the RK are presented the metarials about the life and creative activity of K.Myrza Ali, his works and articles on the pages of the periodical press and also literature about him.

We have 352 guests and no members online