There in the reading hall of the Arts department is organized the book exhibition named “Kop undi kudiret” dedicated to the 80-th anniversary of the State choir capella after B.Baikadamov. 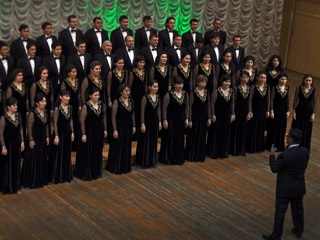 The honored collective of the republic, the winner of the All-Union competitions the Kazakh choir capella started its creative activity in 1935. In the beginning it was a small choir headed by the composer Dmitriy Dmitriyevich Matsutsin. In February, 1939 it was transformed into the choir capella.

During the period of formation of the Kazakh choir the collective was headed by such musicians-professionals like V.Lebedev, L.Khamidi,  B.Orlov, B.Baikadamov, G.Vinogradova. Between 1959-1991 the artistic leader of the capella was the people’s artiste of the USSR A.V.Molodov. in 1997 the caperlla was given the named of B.Baikadamov. The formation of the collective happened together with the growth of professional mastery of the composers of Kazakhstan. At the beginning the capella mainly performed the interpretations of the people’s songs and gradually came to the singing by many voices. After that there started the choir performance of the Kazakh kyuis, which required from the collective the new means of choir expressiveness. And only after some years the collective came to mastering the large musical forms – the suites, the poems, the cantatas and the oratorios. The most important part of the concert activity of the capella is the popularization of the national choir art. The collective performed practically all the works of the composers of Kazakhstan, written for the choir. In its repertoire there are about five hundred works and they are performed in twenty languages of the world. These are such masterpieces of musical art like

“The requiem” by Mozart, “Misesere” by Jomelli, “Stabat mater” by Pergoleze, “The fantasy” by Beethoven, many works for the choir by Rakhmaninov and Sviridov. The capella performed in many cities and district centres of Kazakhstan and the Russian Federation, in the republics of the Central Asia and the Caucases, the Ukraine and the Baltic countries. After the concert in Moscow dedicated to the 40-th anniversary of the Victory, the newspaper “Soviet culture” wrote that the collective “demonstrated the rich creative diapason, elucidating all the means and techniques of artistic expressiveness accessible for this genre”. “The virtuosity and the splendid mastery of different techniques of singing in the choir were demonstrated by the Kazakh artistes”, - noted the magazine “Soviet music”. The Kazakh choir capella is the winner of

the competition of artistic collectives of the USSR in 1968-1970. In 1967 the Kazakh choir capella was awarded the title of the Honored labour collective of Kazakhstan.

There at the exhibition are presented the materials about the creative activity of the State choir capella after B.Baikadamov from the fond of bo0ok and periodical editions of National library of the RK.

We invite to the book exhibition!

We have 379 guests and no members online