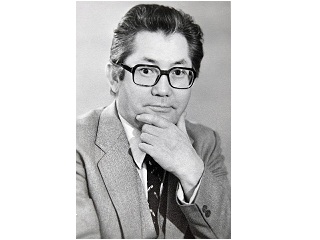 There in the reading hall of the Arts’ department is organized the book exhibition “Saz onerinyn sanlagy – Erkegali Rakhmadiyev”, dedicated to the 90-th birthday of the outstanding state and public figure, composer, people’s artiste of the USSR, winner of the State prize of the Kazakh SSR, professor, one of the founders of the genre of the symphonic kyui of Kazakh music Erkegali Rakhmadiyev.

The purpose of the exhibition is the acquaintance of the readers with the life and creative activity of the composer Erkegali Rakhmadiyev, the popularization of his works and the research literature about him.

Rakhmadiyev Erkegali Zhabykbayevich was born on August 1, 1930 in the village  Madeniyet of the Shubartauskiy district of the Semipalatinskaya region. Beginning from the 6-th form he was given to the boarding-school of the kolkhoz “Yulgi”. In 1947 he was awarded with the medal “For the valorous labour in the Great Patriotic war”. In 1948 he was chosen by N.Tlendiyev into the group of musically gifted children for the receiving of musical education, and was accepted into the musical school by the class of the dombyra in Almaty city in the autumn of that same year. After finishing the school, Erkegali in the summer of 1952 successfully passed through the exams and became the student of the faculty of composition of the Kazakh state conservatoire, where his pedagogue was E. Brusilovskiy. In 1957 E. Rakhmadiyev as his diploma work presented before the State examination commission the first part of the opera “Kamar sulu”. After that E. Rakhmadiyev enters the Moscow conservatoire after P.I. Chaikovskiy.

In 1962 there in Moscow at the competition of young composers his poem for the choir “Balkhashtagy kesh” was marked by the dip0loma of the first degree. On April 15, 1963 there at the Kazakh state academic theatyre of opera and ballet after Abai took place the premier of his opera “Kamar sulu”.

Each of his works (the operas, the concerts, the symphonic poems, the kyuis, the cantatas, the songs, and romances) occupies an especial place in the cultural life of the republic.

The pedagogical and administrative activity of Erkegali Rakhmadiyev began already in the student years. He worked as a teacher at the Kazakh state women’s pedagogical institute. After the courses of qualification upgrading in Moscow in 1958-59 he headed the cabinet of folklore at the Almatinskaya conservatoire, he was appointed the head of the Kazakh state philharmonic society after Zhambyl. In 1961-65 he worked as the head of the Chief department of arts of the Ministry of culture of the Kazakh SSR, and in 1966 he was appointed director of the Theatre of opera and ballet after Abai. In 1967 he became the rector of the Kazakh state conservatoire after Kurmangazy, and in 1968 – the chairman of the Union of composers of Kazakhstan and the secretary of the Union of composers of the USSR. Under the leadership of professor Erkegali Rakhmadiyev there finished the conservatoire the talented composers O.Nesipkhanov, T. Kazhgaliyev, S. Erkinbekov, O. Zhaniyarov, S. Romashenko, V. Strigotskiy, M. Taimenkeyev. In 1991 to 1993 he occupied the post of minister of culture of the RK.

His artistic approach combines the folk-song material with the language of modern music. The works of E. Rakhmadiyev: the operas “Kamar sulu”, “Dala tany”, “Alpamys”, the symphonic kyuis “Dairabai”, “Kudasha-duman”, the symphonic poems “Amankeldy”, “Tolgau”, the cantata “Ayastan”, the choir poem “Balkashtagy kesh” are widely known in Kazakhstan and abroad.

There upon the book exhibition are presented the works “Bala gashyk”; “Oner orinde.

At the top”; “Time and music”, the art-study monograph L.V. Izmailova “Erkegali Rakhmadiyev”, the documentary story of Zh. Rsaldin “Anshi bakyty”, the collection of the songs ”Alkaly toptyn azhary”, “An zharmenke – The songs of the peoples of Kazakhstan”, the book of the musical expert N. Ketegenova “The creative portraits of the composers of Kazakhstan” and others.

We invite you to the book exhibition!