Took place the meeting with the museum specialists from Russia Svetlana Tarasyuk and Alexandra Noskova. 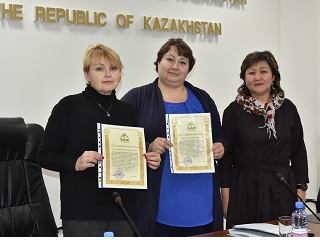 On November 5, 2019 there in the hall after N.Dauletova of the National library of the RK of the Ministry of culture and sport of the RK  with the support of the General consulate of the RF in Almaty city and the Representation of Rossotrudnichestvo took place the meeting with the museum specialists from Russia Svetlana Tarasyuk and Alexandra Noskova.

There with the word of greeting and as the moderator of the given activity spoke Deputy director of National library of the Republic of Kazakhstan A.Kh.Yussupova.

the museum watchmen was accompanied by the video-roll about the history of the museum. There at the museum lesson the pupils learned about the morals and the norms of etiquette of the XIX-th century.

There in the meeting participated the pupils and the teachers of the schools №124, the International school-lyceum “Dastar”, the school NGS (New Generation School), the lyceum №134, the school №135, the lovers of the creative activity of A.S.Pushkin.

The pupils asked questions about the museum, its appearance, about the work of A.S.Pushkin, about the relation between the National library of the RK and the today’s speech of the museum specialists from “The house of the station’s watchman” which the guests and the administration of the library answered with great pleasure.

We have 867 guests and no members online