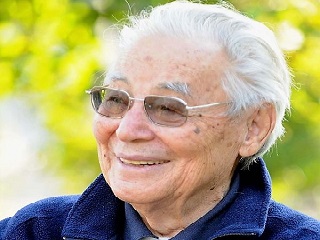 There in the reading-hall “Kazakstan kitaptary” is organized the book exhibition “Tenizdei tolkygan kalamger” dedicated to the 95-th birthday of the people’s writer of Kazakhstan, translator, winner of the State prize of the USSR, participant of the Great Patriotic war  Nurpeisov Abdizhamil Karimovich.

Abdizhamil Karimovich Nurpeisov was born in the village Kulandy of the Aral district of the Kyzylorda region. In 1942 he finished the secondary school and being eighteen years of age was summoned to the Red Army. In 1941-1945 he went as a soldier through the fiery roads of the Great Patriotic war.

On 1956 he graduated from the Moscow literary institute after M.Gorkiy. The first publications in the press are in 1949. In 1962-1964 – chief editor of “Zhuldyz” magazine, consultant of the Writers’ union of Kazakhstan, from 2000 – chairman of the council of editors of “Tan-Sholpan” magazine.

The first novel of A.Nurpeisov “Kurlyandia” about the Great Patriotic war was published in 1950. The novel received a high estimate of the public and was awarded the State prize of the Kazakh SSR after Djambul (1950).

Already in 1947 A.Nurpeisov had thought of writing the historical-revolutionary trilogy “Blood and sweat”. The author wrote his work non-stop during more than for two decades. The giant world is re-created in the three books: the first book “The twilight” (1961), the second book is “The ordeals” (1964), the third book is “The collapse” (1970). The novel is about the hard fate of the Kazakh people in 1916-1918, about the great human tribulations and rare joys, about the crashing of the nomadic everyday life, the crash of the clannish and tribal relations and morals. This book is about the awakening of the steppe. The width of social generalizations, the subtlety of psychological analysis, the brightness of original national characters made this trilogy about the fishermen of Aral a noticeable phenomenon not only of  the Kazakh but of the whole Soviet literature.

The trilogy “Blood and sweat”, the dilogy “The last duty” is not only the success of A.Nurpeisov but of the whole Kazakh literature. For the exceptional work the writer was highly estimated by the people and was awarded the State prize of the USSR. There by the literary scenario of the novel was shot the feature film, there were staged the plays. The book is translated into many languages of the world.

A.Nurpeisov is the author of multiple essay-books: “The meditations”, “Everything in him sang”, “The region of blue mountains”, “The caravans of memory”, “My destiny, my pain – my Aral”. The writer on 1987 published the book “The duty” about the compatriot6s-fishermen, about the hard destiny of the Aral Sea, in 1993 – the novel-dilogy “Songy paryz” (“The last duty”).

Much creative time the writer dedicated to translation activity. The bright example and great success of the writer are the works of the Spanish playwright A.Keson, the classics of Russian literature A.Chekhov, M.Gorkiy, the plays of N.Khikmet translated by him onto the Kazakh language.

There at the book exhibition “Tenizdei tolkygan kalamger” out of the fond of the fond of National library of the RK are presented materials about the life and creative activity of A.Nurpeisov, his works and literature about him.

We have 320 guests and no members online