Organized the book exhibition ”Alem gylymynyn sanlagy” dedicated to the birthday of the prominent scientist-mathematician, academician of the Academy of sciences of the RK Umirzak Makhmutovich Sultangazin.

There in the hall for scientific workers after U.M.Sultangazin is organized the book exhibition ”Alem gylymynyn sanlagy” dedicated to the birthday of the prominent scientist-mathematician, academician of the Academy of sciences of the RK, the creator of  the Kazakhstani scientific school in the sphere of the theory of transference of irradiation Umirzak Makhmutovich Sultangazin. 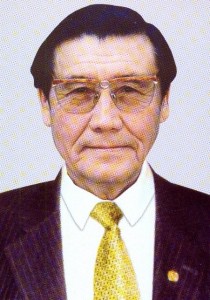 Umirzak Makhmutovich Sultangazin was born on October 4, 1936 in the settlement of Kara-Oba of the Uritsk district of the Kustanai region. From 1944 to 1953 he studied at the Kara-Obinsk secondary school. In 1958 he graduated with honors from the physical-mathematical faculty of the Kazakh state university after S.M.Kirov (today the KazNU after Al-Farabi).

The proclivities for science were discovered already during the student years. There at the university U.Sultangazin was engaged in studying the mechanics of the point of the variable mass. Under the leadership of academician of the AS of the Kaz.SSR K.P.Persidskiy and professor V.A.Sapa he executed the diploma work by the theme “The two tasks of relative movement of the point of variable mass” which was reported and published at the II republican conference on mathematics and mechanics.

U.M.Sultangazin is a prominent scientist-mathematician, academician of the Academy of sciences of the RK, the creator of the Kazakhstani scientific school in the sphere of the theory of transference of irradiation. He purposefully and fruitfully worked upon the formation of the necessary interdisciplinary programmes and was insistent upon their good-quality execution. The results of the researches in the sphere of the metahematical theory of the non-linear models of the equation of Boltzman and computational mathematics, including the methods of creation and justification of various schemes for the multi-measure tasks of the kinetic theory of transference of irradiation, he brought to use the theories of plasma, in the dynamics of discharged gases, in the theory of transference of irradiations etc. for these and other scientific works U.Sultangazin was awarded the State prize of the USSR (1987), the prize of  the Czechoslovak academy of sciences in the sphere of natural sciences (1989).

He is awarded with the orders of Lenin, Labour Red Banner, “Parasat”, the medals after S.P.Korolev (1986), after P.L.Kapitsa (1996), the Jubilee medal to the 10-th anniversary of independence of Kazakhstan (2001), the bronze medal of the International association of participants of space flights (2001). The winner of the prize “Tarlan” in the nomination “Science”. He is awarded with the Honorary certificates of the Supreme Soviet of the Kazakh SSR (1982, 1986), the Russian academy of cosmonautics after K.E. Tsiolkovskiy (2002), with multiple honorary diplomas and medals.

There at the National library of the Republic of Kazakhstan today the hall for scientific workers bears the name of Umirzak Makhmutovich Sultangazin. The purpose of giving the name of the scientist is the commemoration of memory and the popularization of the creative heritage of the outstanding scientist who made a huge contribution into the development of the mathematical science and the raising of prestige of Kazakhstan at the world level.

There at the book exhibition “Alem gylymynyn sanlagy” out of the fond of National library of the RK are presented the materials about the life and activity of U.Sultangazin, his scientific works, the articles on the pages of the periodical press, and also the exhibition of photographs of the scientist.

We invite everyone to the exhibition!

We have 447 guests and no members online