There on May 31, 2019 at 11:00 hours in the reading hall “Kazakhstan kitaptary” for the Day of memory of victims of the political repressions took place the evening dedicated to the 125-th birthday of the prominent public and state figure “Alashtyn arda uly – Sultanbek Kozhanov” and also the literary review in memory of Iliyas Zhansugurov, Saken Seifullin, Beimbet Mailin. 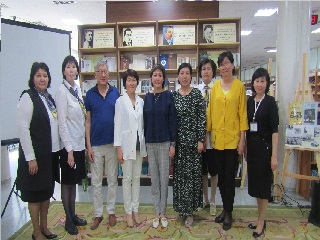 The Day of memory of victims of the political repressions is the day in memory of the victims that perished in the epoch of the Stalinist regime: the famine, the mass repressions, the persecutions and the violent deportation of innocent people. One of the victims of the political repressions of those times was the prominent public and state figure, a scientist, publicist, editor Sultanbek Kozhanov. Participant of the fight for the freedom and independence of the Single Turkestan.

Sultanbek Kozhanov (1894-1938) was the people’s commissar of enlightenment. He made a considerable contribution into the development of the print industry and national theatre of Turkestan, he organized the publication of “Ak zhol” newspaper, special attention he paid to agriculture. He personally participated in the transfer of the capital from Orenburg to Akmechet. By the proposal of S.Kozhanov the I-st congress of the Soviets restored the true name of the Kazakhs by rectifying the distorted name “Kirghiz” during the tsarist period into “Kazakh”, he renamed the capital into Kyzylorda.

The poets-coevals Saken Seifullin, Iliyas Zhansugurov, Beimbet Mailin are the founders of Kazakh literature, the highly talented painters of the native Kazakh word. They lived almost at the same time, were repressed, arrested and shot for the freedom of word. They were posthumously rehabilitated. Each of them left a deep trace in the national history, culture and literature.

The activity was organized by “Kazakhstan kitaptary” Service and Dissertations Department. There within the framework of the evening were organized the book exhibition from the fond of National library of the RK, where there will be presented the materials about the life and activity of S.Kozhanov, S.Seifullin, I.Zhansugurov and B.Mailin, there will be organized the slide-show of the photographs and a review by the materials of the book exhibition. The guests of the evening were the great grand daughter of Beimbet Mailin – president of the public foundation “Foundation of Beimbet Mailin” in Almaty city Saltanat Mustafina, the students of the college at KazGASA, the children from Karaganda city resting at the republican study-salutary centre “Baldauren-Kapshagai” and the librarians.

The review by the materials of the book exhibition “Alashtyn arda uly – Sultanbek Kozhanov” was carried out by the head of the Dissertations department G.M.Bakhtygereyeva. the workers of the Service “Kazakhstan kitaptary” K.N.Kasymbekova, S.T.Rayimbekova and A.A.Bakbergenova told the audience about the life, creative activity and tragic fates of the three well-known personalities. The narrations of the speakers were accompanied by the demonstration of the documentary film and the slide-show of the photographs. The speeches of the librarians aroused great interest of the readers and youth of the library. S.Mustafina told the people about the fond, the life and tragic fate of her great grand-father B.Mailin. In conclusion of the meeting there were words of gratitude to the librarians from the readers for the organization of the activity and the fruitful narrations.

We have 121 guests and no members online