There to the Day of the capital of Kazakhstan is organized the book exhibition “Nur-Sultan – beibitshilik kalasy”. 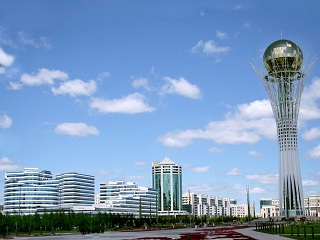 On July 4 there in the foyer of the first floor of National library of the RK to the Day of the capital of Kazakhstan is organized the book exhibition “Nur-Sultan – beibitshilik kalasy”.

The decision about the transference of the capital from Almaty city to Akmola city was taken by the Supreme Soviet of the Republic of Kazakhstan on July 6, 1994. The official transference of the capital took place on December 10, 1997. There by the Decree of the President dated May 6, 1998 the city of Akmola was renamed into Astana. In 1999 there by the decision of UNESCO Astana was awarded the title of “The city of the world”. Beginning from 2000 the main city of Kazakhstan is the member of the International Assembly of the capitals and large cities.

During the 24 years’ time the capital of Kazakhstan became the prospering city with the developed infrastructure and the state centre of the cultural, political and public life. The giving to the city of the status of the capital opened before it the grandiose prospects of growth and development. During the time elapsed there took place the notable changes not only in the outward appearance  of the city nut also in the sphere of production, construction, culture, social provision of the population.

There at the exhibition are presented the encyclopaedic and reference editions, the literature about the history of the capital, its cultural centres and sight-seeing places.

© 2013-2023 National library of the Republic of Kazakhstan. All Rights Reserved.
Creation and website maintenance – Helena Burbel.