Оrganized the exhibition by the theme “Akparat aidyny”, dedicated to the Day of mass media means in Kazakhstan. 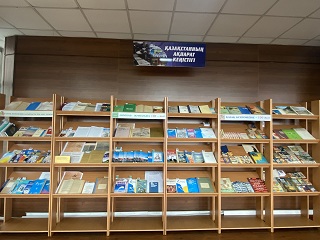 There in the reading hall of periodical editions is organized the exhibition by the theme “Akparat aidyny”, dedicated to the Day of mass media means in Kazakhstan.

Annually on June 28 there in Kazakhstan is celebrated the Day of workers of mass media means of information. The work of the professional journalists not only changes the life and the destinies of people but also solves the problems of systemic character  and gives the people the hope.  More than a century ago the teacher of the nation Akhmet Baitursynov thus characterized the role of the press: “The newspaper is the eyes of the people, his ears and tongue”.

The exhibition consists of the following chapters:

The Kazakh literary magazine “Aikap” came out in 1911-1915. There in the magazine under their names and the pseudonyms published their first publicistic and literary works Sabit Donentayev, Myrzhakyp Dulatov and many others.

The division “Sholpan zhurnalyna – 100 zhyl”. The magazine “Sholpan” was published from October, 1922 to June, 1923 in Tashkent city. The Kirghiz-Kazakh edition, which saw the light once in a month, highlighted the issues of politics, national economy, education, literature and the topical problems in the life of the people. Altogether there saw the light 8 numbers. Chief editor was Isa Toktybayev. There with the magazine worked the patriots of the nation, the public figures: N. Turekulov, S. Khodzhanov, S. Asfendiyarov, T.Ryskulov, O. Zhandosov, M. Dulatov and others.

The history of the magazine reflects the development of literature of Kazakhstan in the XX-XXI-st centuries.

The part “Kazak kyuntizbesine – 100 zhyl”. “The Kazakh calendar” was one of the first editions of reference literature in the republic. The first copy was published in Orenburg in 1922 by “Kazgosizdat” in the Kazakh language (on the basis of the Arabic script). “The Kazakh calendar” contained the brief data on the history of the Kazakh people, geography and territory of the republic, agriculture, industry etc. To 1931 the calendar was printed in the Latin script. There in the preparation of the editions participated: B. Mailin, I. Zhansugurov, E. Aldongarov and others. The calendars are of different kinds: the tear-off ones, the flip ones, report-card calendar, pocket calendars, everyday calendar and others.

There at the exhibition are presented the historical periodical editions from the fond of National library of the RK, articles and materials about the history of the Kazakh periodical press published in the magazines: “Kazakstan kommunisy”, “Akikat”, “Kazak tarikhy”, “Aikap”, “Zhuldyz”, “Sholpan”, “Tan-Sholpan” and also “The Kazak kalendary” for different years.