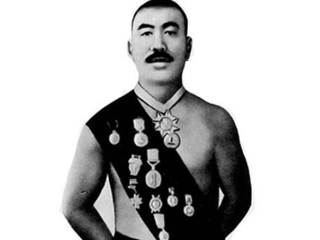 There in the hall of National library of the RK after N. Dauletova  is organized the book exhibition “Kyush atasy - Kazhymukan”, dedicated to the 150-th birthday of the first professional Kazakh wrestler, circus artiste Khadzhimukan Munaitpasov.

Khadzhimukan Munaitpasov was born on April 7, 1871 in the aul Karaotkel of the Akmolinskiy region. The first Kazakh who won the title of the champion of the world in French wrestling, many times he won in the world, Russian, regional and after that at the all-Union championships ib classical wrestling among the superheavy-weighters. His forefathers by his father’s line were the strongmen, among which – the legendary Koblandy batyr.

His grandfather Ernak started teaching Khadzhimukan the wisdom of the national fight of Kazakhsha kures. His father Munaitpas was not a rcih man, but he often won in the wrestling competitions for which he got the nickname – the Thicklegged Baluan.

The forefathers of Khadzhimukan by the mother’s line were also the batyrs. His grandfather Lek possessed such a might that he could tear away the trees together with the roots. Khadzhimukan was not yet 17 years old but the fame about him was spreading in all the Kazakh steppe.

When he was 18 years old, Khadzhimukan was invited to the travelling circus where he was taught the tricks of the circus fight. In 1901 there in Omsk took place the championship in French wrestling where Khadzhimukan came out upon the professional carpet for the first time. There by chance he was given the most experienced fighter – Andrei Zlobin. With great difficulty he won the young Kazakh powerman. Estimating his colossal potential, Andrei Zlobin gave to Khadzhimukan the recommendation to the wrestling school of Ivan Lebedev.

After finishing this school Khadzhimukan performs as a professional wrestler. The organizers of the competitions pretended that he was the Japanese wrestler Mukhanura – the formidable samurai and the Mikado bodyguard. It was the usual practice of those times when the wrestling competitions looked more like the modern American theatrical catch-fight.

From 1905 to 1914 Khadzhimukan visited 28 countries of the world, he was in China, Sweden, the USA and Argentina. He won 48 different medals but not a single one of them was preserved. Especially famous was his victory over the Japanese wrestler Sarakiki Djindofu.

Khadzhimukan had the nickname – the Black Ivan, because he performed together with the other three Ivans – Ivan Poddubnyi, Ivan Zayikin and Ivan Shemyakin. And at the competitions in Turkey Khadzhimukan was called – Kara Mustafa (Black Mustafa). After the victory over the Turkish famous wrestler Nurullakh, the ruler of Istambul Shakir-pasha offered to the Kazakh wrestler to perform the Kadzh to Mecca. It was namely after this pilgrimage Mukan Manaitpasov received to his name the prefix “khadzhi”. Under this “brand” he performed for the first time at the competitions in Saratov.

After the Civil war of the 1920-s of the last century Khadzhimukan organizes the championships in wrestling in Kazakhstan. And in 1926 he opens in Kyzylorda the first professional theatre. There in it began their creative activity Amre Kashaubayev, Kalibek Kuanyshbayev and Isa Baizakov.

When the Great Patriotic war began, the old athlete decided to help the Motherland. He organized the shapito circus with which he travelled in the villages. The 100 thousand rubles which were gathered during the performances, Khadzhimukan gave to the Defence fond of the USSR. For the collected money he asks to donate on his behalf to the Soviet army the aircraft (the model U-2) , which was named in honour of Amangeldy Imanov. This aircraft flown by the pilot Kazhytai Shalabayev fought at the Baltic and Leningrad fronts and performed 217 military raids.

The great Kazakh wrestler died from pneumonia in August, 1948. His grave is situated 5 kilometres from the village of Temirlanovka of the Southern-Kazakhstani region. In 1980 there in the village was opened the museum dedicated to the legendary wrestler.

We have 271 guests and no members online