There is published the first number this year of the magazine “KITAP&KITAPKHANA”. 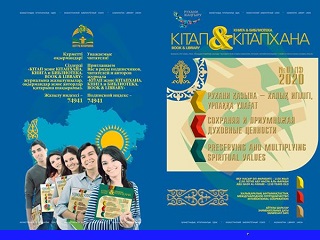 Dear colleagues! There is published the first number this year of the magazine “KITAP&KITAPKHANA” in the Kazakh, Russian and English languages.

The magazine is opened with the heading shown in the Address of the President of the RK Kasym-Zhomart Tokayev on September 2 “The critical dialogue in society – the basis of the stability and prosperity of Kazakhstan” named “Assistance of the workers of culture”.

There among other things is published the Decree of the First President of the RK N.A.Nazarbayev on March 15, 1991 named “About the spring people’s holiday Nauryz”.

Al-Farabi P.Suleimenov named “The public-political views of Abu Nasr Al-Farabi” is dedicated to the 1150-the birthday of the great figure of the great steppe.

The article of the director of the universal scientific-library of the Turkestan region Sh.A. Dinasilova named “Abai. Civilization. The four stops at the threshold of Europe” is the bright testimony of the activities for the propagation in the foreign countries of the precious heritage at the world level dedicated to the 175-th birthday of the great poet.

There in the magazine on January 31 this year you may become acquainted with the information about the online conference between the place of Akzhaiykand the cities of Almaty and Atyrau dedicated to the people’s artiste of Kazakhstan, winner of the State prize of the USSR and Kazakhstan, the prominent poet Zh.Moldagaliyev dedicated to his centenary.

Also of interest to the readers will be the article “Information as a strategical resource” of the Mai-model library of the Kostanai region G.S. Vakulenko.

The next article for your attention is the article by honored librarian A.T.Baibosynova named “The work with the historical data” will attract one with its unique language, the deep upbringing effect dedicated to the book of the honored veteran of National library Kari Zholdybike Nusipkyzy named “The dream of my father”. And the article prepared with the use of the statistical informations by the head of the department of the Pavlodar regional library after S.Toraigyrov A.A. Zhylkybekova named “The reader ticket as one of the three documents of man” is dedicated to the present-day state of the library and gives this issue full analysis.

The article of the head of department of the Republican scientific-pedagogical library in Almaty city K.Zh. Imanbekova named “The poetry of the Kazakh language and the folk narrators of the khan epoch” is a precious work under the title of “750 years to the Golden Horde”.

The article named “The book in the formation of the intellectual culture of the people” by the deputy director for informational technologies and innovations N.A. Iskaliyeva prepared by the results of the international conference which took place on September 10-12, 2019 in the city of Brest of the Republic of Belarus is dedicated to the 75-th anniversary of the Great Victory. The article named “The representatives of the spiritual treasury” by the head specialist of the department of rare books and manuscripts F.K. Bekturbekova gives a lot of information about the work of the Service of informational resources. The given number of the magazine includes the article of the librarian of the Service of informational-image works of National library of the RK E.N. Orynbai i9s about the literary centre after Abai which opened on

Dear colleagues, we await from you the deep and clever articles for the magazine “KITAP&KITAPKHANA” which is the primary publication of the librarians of the republic.

The top specialist of the Scientific-methodological service of National library of the RK. 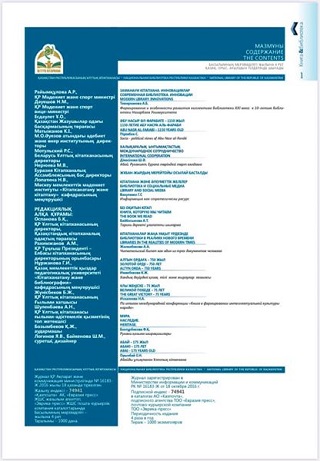 We have 248 guests and no members online