There was organized in the online format the festival “The spiritual treasure - 2020” of the establishments of culture and art and their workers. 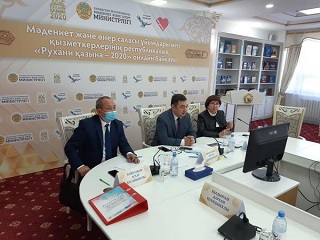 There was organized for the third time the festival in the online format “Spiritual treasure -2020” with the purpose of implementation of the programme article of the First President of the Republic of Kazakhstan – Head of State N.A.Nazarbayev named: “The direction for the future: the spiritual renovation” for exchange of experience, development of Kazakhstani patriotism and national-cultural unity, propagation of national culture and the image of the regional establishments.

Doctor of science (history), academician of the National academy of sciences of the RK, chairman of the board of the JSC of the republican newspaper “Egemen Kazakstan” Kydyrali Darkhan Kuandykuly made the speech and expressed his good wishes.

Locally in the places below the selection process took place up to the September 14, the best ones took their further promotion at the republican level. And the republican competition beginning from today will last till September the 30-th.

The members of the board of judges in the online format will evaluate the works of the participants.

And the ceremony of awarding the victors will take place on October 7 in the city of Nur-Sultan in the online format due to the epidemiological situation and the quarantine conditions, and will take place at the Republican national museum. The ceremony of awarding will be shown live at the official pages in Youtube, Facebook of the Ministry of culture and sport of the RK. The winners will be awarded with the diplomas and money.

We have 230 guests and no members online