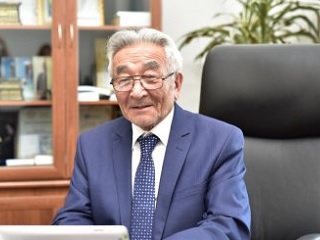 There in the hall for scientific workers after U.M.Sultangazin is organized the book exhibition named “Otandyk tamaktanu zhuiyesinyn akademigy” dedicated to the 90-th birthday of the honored figure of Kazakhstan, winner of the State prize of the RK, academician of the Russian academy of medical sciences, academician of the NAS of the RK Toregeldy Sharmanovich Sharmanov.

Sharmanov Toregeldy Sharmanovich was born on October 19, 1930 in the village of Ulytau of the Karagandinskaya region. In 1955 he graduated from the Karagandinskiy state medical institute. In 1955-1958 he studied at the post-graduate course there. In 1961 he defended the candidate dissertation by the theme: “The materials for experimental studying of the influence of sintomicin and levomicin upon blood” and in 1968 – the doctoral dissertation by the theme “The hypovitaminosis C in Kazakhstan and its influence upon the immunobiological reactivity of the organism in brucellosis”.

A considerable contribution of academician T.Sharmanov into the world and domestic healthcare was the carrying out by his initiative in 1978 in Alma-Ata city of the International conference for primary medical-sanitary assistance under the aegis of the WHO and UNICEF. There at the conference was adopted the Alma-Atinskaya declaration which is one of the foundation documents in the world healthcare. There in the declaration was explained the conception of organization of the national system of primary medical-sanitary assistance.

There under the scientific leadership of T.Sharmanov were defended 44 doctoral and 170 candidate dissertations. The author of more than 360 publications, from among which there are 22 monographs: “Nourishment and health” (1974), “Protein nourishment and vitamin C” (1977), ”Vitamin A and protein nourishment” (1978), ”Health protection in Kazakhstan” (1978), “The economics of health protection and the prospects of the state service of protection of health in Kazakhstan” (2000), ”The world health protection before and after the Great Alma-Atinskaya conference” (2003) and others. He has 26 author’s certificates for inventions and patents.

For the scientific activity T.Sharmanov is awarded with the orders of the October revolution (1976), Friendship of the peoples (1980), Parasat (1996), Dostyk of the I-st degree (2010), Barys (2016) and also with the order after Akhmet Baitursynov and the medals “For labor valience” (1969), “In honour of the centenary from the day of birth of V.I. Lenin”. The highest award of the WHO for the outstanding contribution into the world healthcare – the medal after Leon Bernard (2005). The winner of the State prize of the RK (2001, 2019). The honorary citizen of Almaty city.

There at the book exhibition “Otandyk tamaktanu zhuiyesinyn akademigy” out of the fond of the National library of the RK are presented the materials about the life and activity of Toregeldy Sharmanov, his scientific works, articles and also the recollections of the scientists upon the pages of the periodical press.

We have 473 guests and no members online