In the Hall of world literature took place the opening of the Book corner “The window to Korea”. 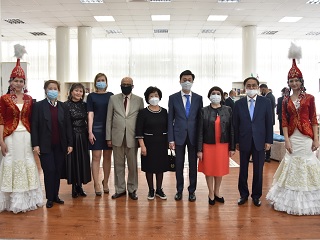 On October 8, 2020 at 11:00 hours there in the Hall of world literature took place the opening of the Book corner “The window to Korea”. The activity was prepared by National library of the RK together with the General consulate of Korea in Almaty city.

The Great steppe and the Korean peninsula are tied by the links the history of which goes into antiquity, but it is namely in the conditions of the national sovereignty of the Republic of Kazakhstan and the Republic of Korea which made it possible to establish the diplomatic relations between the two countries, that there dynamically develop the multilateral cooperation.

Kazakhstan and Korea are united by the strong cultural-humanitarian links. And this inspires for new ideas, projects, joint cultural actions.

There at the activity spoke: director of National library of the RK Ospanova Bakytzhamal Kayirbekovna, Head of the representation of the MFA of the RK in Almaty city Erlan Uzanovich Iskakov, the General consul of the Republic of Korea in Almaty city Kim Khing Su, Head of the department of historical-cultural heritage of the Department of culture of Almaty city Djulayev Akhat Kairatovich, Academician of the National Academy of sciences of the Republic of Kazakhstan, the Russian Academy of natural sciences, professor of the International academy of informatization, doctor, honored figure of science and technology of the Re[public of Kazakhstan Pak Ivan Timofeyevich, Deputy Chairman of the Almatinskiy Korean national centre Kan Georgiy Vasilyevich.

During the activity there was demonstrated the video-greeting of General director of the National library of Korea Mrs. So Kheran.

There is signed the memorandum on cooperation between National library of the RK and the General consulate of Korea in Almaty city.

The activity was accompanied by the performance of the symphonic quartet of Almaty city, the demonstration upon the screens of the TV-sets and the informational terminal of the video-topics about the activity of the National library of Korea and the slidfes