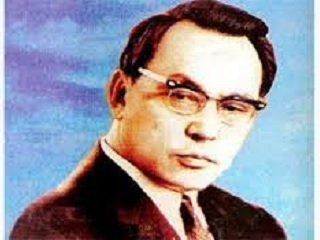 There in the reading hall of “Kazakstan kitaptary” is organized the book exhibition named “Poeziya bagynyn baiteregy” dedicated to the centenary of the well-known Kazakh poet, translator, journalist, the People’s writer of Kazakhstan, winner of the State prize ofthe USSR and the Kazakh SSR after Abai, Zhuban Moldagaliyev.

Moldagaliyev Zhuban was born on October 5, 1920 in the village of Zhylandy of  the Akzhaiyk district of the Western-Kazakhstani region. In 1940 he finished the Uralsk agricultural professional school.

The works of Zhuban Moldagaliyev were translated into many languages of the world. He fruitfully worker also in the sphere of artistic translation. He translated into the Kazakh language the works of A.S. Pushkin, M.Yu.Lermontov, Nazym Khikmet, the verses of the Russian poets of the XX-th century.

In 2000 there in Urals city was established the monument-bust, after him were named the streets, libraries and schools of Kazakhstan.

There at the book exhibition named “Poeziya bagynyn baiteregy” out of the fond of the National library of the RK are presented the materials about the life and activity of Zhuban Moldagaliyev, his works, articles, the dissertations of the scientists of Kazakhstan who researched the accretive activity of the poet, and also the recollections of the relations and friends upon the pages of the periodical press.

We have 291 guests and no members online