Organized the book exhibition named “The master of Uigur scenic art”, dedicated to the 70-th birthday of the actor of theatre and cinema, people’s artiste of Kazakhstan Akhmadiyev Murat Abdureyimovich (1950). 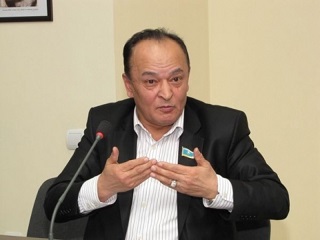 There in the reading hall of the Arts’ department is organized the book exhibition named “The master of Uigur scenic art”, dedicated to the 70-th birthday of the actor of theatre and cinema, people’s artiste of Kazakhstan Akhmadiyev Murat Abdureyimovich (1950).

Akhmadiyev Murat Abdureyimovich was born on January 12, 1950 in the city of Chugunak in the People’s Republic of China. In 1961 the family of the Akhmadiyevs moved for permanent living to Kazakhstan.

In 1965 M.Ahmadiyev was shot in the feature film named “What the taiga was silent about” of the production of the Moscow cinema studio after M.Gorkiy in the role of the Caucasian boy Alesha, in 1966 in the film of the legendary director Sh.Aimanov by the script of O.Suleimenov “The land of the fathers” he played the role of the boy Bayan, in 1968 he participated in the shooting of the film “The angel in the skull-cap”.

In 1975 he graduated from the Almatinskaya state conservatoire after Kurmangazy by the speciality of “conducting of the choir”. This same year he organized and became the artistic leader of the vocal-instrumental ensemble “Yashlyk”. From 1984 to 2007 he headedthe professional Uigur theatre of musical comedy. From 2007 he is the deputy of the Majilis of the Parliament of Kazakhstan.

He is awarded with the order “Kurmet” (2005) and “Parasat” (2010). From 2002 he isthe honorary doctor of art study of the Eurasian university and a member of the Council ofthe Assembly of the people of Kazakhstan.

There at the book exhibition are presented the materials about the life and creative activity of M.Akhmadiyev from the fond of book and periodical editions of National library of the RK.

We have 204 guests and no members online