A book exhibition dedicated to the 100th anniversary of the Soviet and Russian writer F. A. Abramov has been organized. 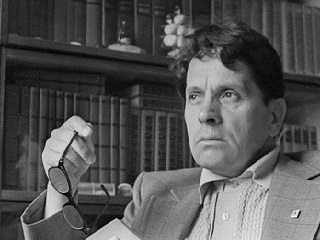 There in the hall of world literature is organized the book exhibition dedicated to the centenary of the Soviet and Russian writer F.A.Abramov.

There in the hall of world literature is organized the book exhibition dedicated to the centenary of the Soviet and Russian writer F.A.Abramov.

Feodor Alexandrovich was born on February 29, 1920 in the village Verkola of the Arkhangelsk region. During the Great Patriotic war in 1941-1945 as a student of the philological faculty of the Leningrad university he went to the front. After the war he finished the higher education, became the candidate of science, head of the chair of Soviet literature at the Leningrad state university. From 1949 he published the literary-critical articles. In 1975 he received the State prize for the novels which formed the trilogy “The Pryasliny” dedicated to the life of the Russian village in the war and after-war years. In 1978 Abramov supplemented the cycle of novels “The house”. An important milestone in the creative activity of Feodor Alexandrovich was the short novel “The wooden horses” the plot of which takes place in his native places – in the Russian North, in Pinezhye. In 1973 the short novel was staged, there was made the play at the theatre on Taganka. He is the author of the stories and essays about the kolkhoz life, the short novels: “Alka” (1972), “Babilei” (1980), “Bezottsovshchina” (1961), “The wooden mausoleums” (1981), “Near and near-by” (1963), “The wooden horses” (1970), “There lived semuzhka” (1962), “The people of the kolkhoz village in the after-war prose” (1954), “Mamonikha” (1973), “M.A.Sholokhov: the seminary pupil” (1958), “Hunting the bear” (1963-64), “Pelageya” (1969), “Travel to the past” (1974), “We eat what we earn” (1979). Already after the death of the writer there was published the novel “The clean book” – the first book of the trilogy which F.Abramov wanted to write dedicated to the thoughts about Russia’s fate.

Awarded the order of Lenin (28.02.1980), the order of the Patriotic war of the II-nd degree (06.08.1946) and the medals “For the defence of Leningrad”, “For the victory over Germany” in the Great Patriotic war of 1941-1945. There in Verkola is opened the museum of Abramov. In 2019 there was restored the All-Russian literary prize after Feodor Abramov “The clean book”. The year 2020 there by the decree of the Governor of the Arkhangelsk region of Russia was declared the year of Feodor Abramov.

There at the book exhibition out of the fond of National library of the RK are presented the works of the writer and the literature about him.

We have 547 guests and no members online