Thematic exhibitions dedicated to the 175th anniversary of the birth of the great Kazakh poet, educator and philosopher Abay Kunanbayev were organized. 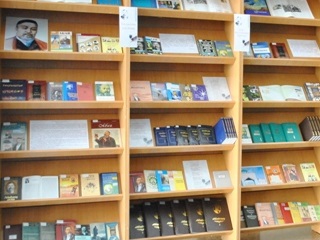 There in the reading halls of world literature, periodical editions, arts, dissertations are organized the thematical exhibitions dedicated to the 175-th birthday of the great Kazakh poet-enlightener and philosopher Abai Kunanbayev.

President of Kazakhstan K.K.Tokayev signed the Decree (dated August 23, 2019 №134) about the Celebration in 2020 at a high organizational and content level of the 175-th jubilee of Abai Kunanbayev. In honour of the jubilee of the great poet there the Government in Kazakhstan has planned the carrying out of approximately 500 different activities.

There at the 37-th session of the Permanent Council of ministers of culture of the states-members of the International organization of Turkic culture TURKSOI was made the decision to announce the year 2020 – the Year of Abai Kunanbayev.

There for the purposes of implementation of the article of the President “Abai and Kazakhstan in the XXI-st century” and the opening to the world of the name of the great Abai National library of the Republic of Kazakhstan organized a number of thematical exhibitions: the exhibitions of scientific works, monographs, dissertations, periodical editions, collections of songs, notes, gramophone records etc.

There in the hall of world literature at the exhibition “Abai acknowledged by the world”  are presented  the editions and translations of the works of Abai in the world languages.

There for the readers will be of interest the translations of the books and “The words of edification” of Abai into the English, Arabic, Chinese, German, Polish, Russian, Turkish, French, Rumanian, Mongol, Czech, Urdu, Hindi, Persian, Vietnamese, Bulgarian, Korean languages. The first language into which there were translated the verses of Abai was the Russian language.

It is of interest to know that in the English language about Abai there was information in 1885. At this time there in Siberia travelled George Kennon. He visited Semipalatinsk in order to come to know closer the life of the political exiles who were serving their sentences in the Siberian cities and settlements. During the long conversations and sittings Kennon heard many times about the Kazakh poet Abai Kunanbayev who liked to visit the public library where he became acquainted with the works of the Russian poets and the Western-European philosophers.  George Kennon for the first time wrote in his book about the works of Abai in 1891. The book “Siberia” of George Kennon is one of the most valuable exhibits of the golden fond of the museum of Abai in Semei. In 1909 there in Kazan saw the light the first collection of works of Abai Kunanbeyav. After that they started to be translated abroad.

There in the hall of periodical editions at the exhibition named “Abai akparat aidynynda” are presented the issues of the publications of “Abai” magazine from 1992, and also the articles of the well-known writers and journalists, public and political figures, published on the pages of the periodical press of Russia and Kazakhstan.

There in the Hall of dissertations at the exhibition “Abai – kemel oidyn kemengeri” for the readers are presented the scientific works, abstracts of theses, doctora; dissertations, in which there were made the researches of the Kazakhstani scientists of the creative activity of Abai from the point of view of philosophy, philology, linguistics, sociology and other sciences. Also there is opened access to the Virtual reading hall of dissertations of the Russian state library, where the user can find additional information about the creative activity of the poet.

In the Hall of arts at the exhibition “Abai oner aleminde” there is collected the musical collection of the works of Abai and the literature about him: the musical notes, the collections of songs, gramophone records, books, magazines, newspapers, electronic editions, guidebooks for the monuments of Abai, the history of the streets named in honour of the poet in the whole world.

There for the readers will be of interest the picturesque albums, the rare copies of gramophone records where there are presented the voices of the great singers of Kazakhstan: Zh.Elebekov, K.Kenzhetayeva,R.Abdullin, F.Sharipova,E.Serkebayev; there from the play “Abai” of M.Auezov to the music of G.Zhubanova there sound the voices in the performance of I.Nogaibayev, Kh.Bukeyeva and others.

The musical gift of the poet found its reflection in the lyrical songs “The letter of Tatjana”, “Aittym salem, Kalamkas”, “The grey clouds”. There to his verses wrote the songs and the romances the composers M.Tulebayev, S.Mukhamedzhanov, G.Zhubanova and others. The recording of the musical heritage of Abai began in the 1920-s of the 20-th century.

We invite everyone to visit our exhibitions!

We have 233 guests and no members online