The ceremony of donating books to the National library of the Republic of Kazakhstan took place. 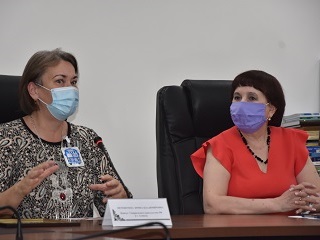 On August 25, 2020 at 15:00 hours there in the Hall after N.K.Dauletova will take place the ceremony of donation of books to National library of the RK from the General consulate of the Russian Federation in Almaty city, the representation of “Rossotrudnichestvo” company in the Republic of Kazakhstan.

There with the word of greeting spoke director of National; library of the RK Bakymzhamal Kayirbekovna Ospanova, expressing gratitude and sincere acknowledgment to the consul of the General consulate of the RF, deputy head of the Representation of “Rossotrudnichestvo” in the Republic of Kazakhstan Irina Vladimirovna Pereverzeva for the fruitful cooperation and considerable contribution into the development of the bilateral cultural-humanitarian relations between the Russian Federation and the Republic of Kazakhstan.

There to the Book Corner of Russia were handed over 215 bbooks from the private library of I.V.Pereverzeva with the donation signature, and also the editions with the personal autographs of the writers. From among them there are: “The Kostroma dwellers – the view after a century” is interesting in that it was signed by the two mayors of Kostroma Pereverzeva I.V. (2003-2008) and Korobov B.K. (1989-2003); the Encyclopaedic dictionaries and collections of documents, among them: “The sultans and batyrs of the Middle clan” (the second half of the XVIII-th century); “The collectioners of Russia of the XVII-th – beginning of the XX-th cc..”; “The staff of generals of the Russian empire” (The encyclopaedic dictionary of generals and admirals from Peter the Great to Nicolas II); “The encyclopaedia of art”, and also the multi-volume collections and selected works of the classics of Russian literature.

Irina Vladimirovna Pereverzeva is the old friend and reliable partner of National library of the RK. Thanks to her multi-year fruitful work there were implemented the joint cultural and educational projects.

The activity was completed by the demonstration of the video-roll named “We were united by the BOOK” about the most significant events in the activity of Pereverzeva I.V. in the development of the Book Corner of Russia at the post of the consul of the General Consulate of the RF.

We have 270 guests and no members online