Took place the working session of the Council of the Kazakhstani Library Union. 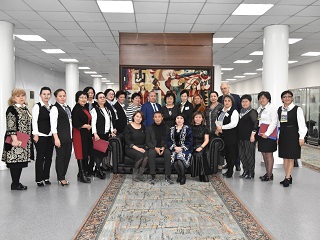 On February 28, 2020 there at the National library of the Republic of Kazakhstan took place the working session of the Council of the Kazakhstani Library Union.

The activity was opened by director of National library of the RK, chairperson of the Kazakhstani library Union Ospanova Bakytzhamal Kayirbekovna with the report named “The state of librarianship in Kazakhstan”. There at the session of the Council were present the 11 heads of the sections and trends of activity of the KLU, the heads of the regional universal, special libraries and those in colleges and universities.

There at the meeting were discussed the topical issues and plans of activity of the regional study establishments, the special and children’s and youth libraries, the Creation of the Centre for preparation and retraining of the library cadres, the issues of subscription for the Russian data-bases and other issues.

Also there in the session of the Kazakhstani Library Union participated the well-known cinema director, chairman of the Union of the cinematographists of the RK, member of the National Council of public trust under the President of the RK Ermek Tursynov, who became acquainted with the topical problems of the libraries of Kazakhstan.

In the course of the council there was made the decision about the creation of two working groups for the activation of the work of the KLU. There was proposed to choose the books from the exchange fond of the RK and the books translated by the state programme into the languages of the UNO.

We have 233 guests and no members online