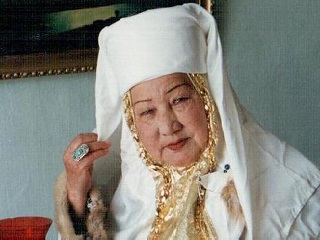 There in the reading hall of the Arts’ department is organized the book exhibition “Kazak teatr onerynyn maitalmany” dedicated to the centenary of the people’s artiste of Kazakhstan Kulyash Sakiyeva (1920-2019).

Kulyash Sakiyeva was born on February 15, 1920 in Zaisan city. From her childhood she was interested in music like her four brothers. In 1930-s together with her elder brother Sapargali she moved to Almaty and entered the workers’ faculty by the speciality of “teacher’s school”. In 1937 she decided to dedicate her life to the theatre. She left her studies at the workers’ faculty and entered the Almaty theatre school and she was the pupil of the director Askar Tokpanov. In 1941 she finished the school, and the role at the exit from the school was the role of Luiza (“Deceit and love” of F.Schiller). After the graduation from the school she became an actress of the Dzhambul regional theatre of drama.

She debuted in the role of Kunikei in the play of M.Auezov “Karakypshak Kobylandy”. There were also the roles of Enlik (“Enlik and Kebek” of M.Auezov), Bayan, Kyz Zhibek (“Kozy-Korpesh and Bayan-Sulu” and “Kyz Zhibek” of G.Musrepov). During the Great Patriotic war she performed before the workers of the rear and the wounded soldiers. In 1952 she went to the Semipalatinsk musical-drama theatre. There with this theatre is connected the bloom of her career, upon its scene she played she played more than one hundred genre roles. Here she created the images of Zhuztailak (“The night thunders” of M.Auezov), Anar (“One tree is not a forest” of A.Tazhibayev), Aktokty, Kamka (“Akhan-sere and Aktokty” and “Kozy Korpesh – Bayan sulu” of G.Musrepov), Mekhmene Banu (“The legend about love” of Nazym Khikmet).

The combination of dramatical mastery of the actress especially brightly were exposed during the performance of the roles of Sholpan (“Aiman-Sholpan” of M.Auezov), Maira (in the same-named play of A.Tazhibayev), Akzhunus (“Er Targyn” of E. Brusilovskiy). She played in the musical dramas. She was the performer of the Kazakh folk songs, she is the author of the texts of approximately 60 songs. She is on the scene for more than 70 years, she brought up many generations of Kazakh artistes.

She participated actively in the political activity. In 1955 was elected deputy of the Supreme Soviet of the Kazakh SSR of the 4-th convocation. In 1971 she participated in the XIII-th congress of the Communist party of Kazakhstan.

There at the book exhibition are presented the materials about the life and creative activity of Kulyash Sakiyeva from the fond of gramophone records, the book and periodical editions of National library of the RK.

We have 430 guests and no members online