Organized the exit book exhibition named “The world of Abai” 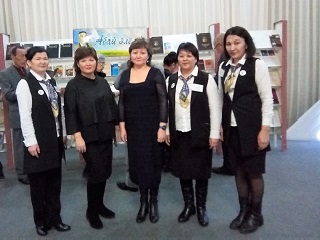 On February 7, 2020 at 19:00 hours the National library of the RK organized the exit book exhibition named “The world of Abai” in the building of the Kazakh state academic folk orchestra after Kurmangazy on the occasion of performing by the orchestra of the holiday concert in honour of the 175-th birthday of Abai Kunanbayev.

The purpose of the book exhibition was the popularization of the works of the great poet of the Kazakh people Abai Kunanbayev who left the ineffaceable trace in the history of Kazakh literature and the creative activity of whom became the treasure heritage for the modern and future generations.

There at the book exhibition out of the fond of National library of the RK are presented the materials about the life and creative activity of Abai, his lyrical verses and poems, the translations of his works, the musical heritage and also the publications of the Kazakh scientists. The review over the book exhibition for the viewers of the concert was carried out by the head of the group “Kazakstan kitaptary” M.Zh.Akbayeva.

There at the holiday concert “Abai alemi” were present the deputy directors of National library of the RK A.Kh.Yussupova and N.A.Iskaliyeva. the majority of the visitors of the activity expressed great interest towards the book exhibition, and also the students of the Almatinskiy technological university read the verses of Abai Kunanbayev and they the poetical torch to the students of the other colleges and universities.

We have 186 guests and no members online