There within the framework of the celebration of the 175-th jubilee of the great poet Abai Kunanbayev in the countries of Europe were opened the “Abai” centres, in which there took place “The Abai readings”. 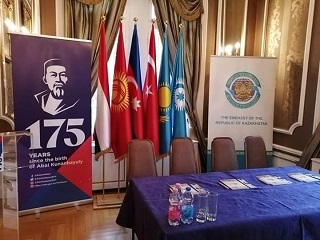 There within the framework of the celebration of the 175-th jubilee of the great poet Abai Kunanbayev in the countries of Europe: Czechia (Prague), Hungary (Budapest), Slovakia (Bratislava), Germany (Berlin) were opened the “Abai” centres, in which there took place “The Abai readings”.

There for the purposes of the propagation of the works of Abai reflected in the article of the head of state K.K.Tokayev named “Abai and Kazakhstan in the XXI-st century”, and also the implementation of the project for the opening in the foreign countries of the “Abai” literary centres, initiated by director of National academic library of the RK Munalbayeva Umitkhan Daurenbekyzy together with the Ministry of culture and sport of the RK, the Ministry of foreign affairs of the RK and the embassies of Kazakhstan abroad were opened the “Abai” literary centres and were organized “The Abai readings”.

The representatives of the creative intelligentsia of the country, among which there are director of National library of the RK Ospanova Bakytzhamal Kayirbekovna, chairman of the Writers’ Union Ulykbek Esdaulet, director of the Institute of literature and art after M.Auezov Matyzhanov Kenzhekhan Islamzhanuly, the Abai studies’ expert Turzyn Zhurtbai and other specialists of the library sphere participated in the solemn ceremonies of the opening of the centres and told the European public about the life and creative activity of Abai Kunanbayev.

Also for the public there was organized the panel named “Abai acknowledged by the world” and also the book-illustrative exhibition and the photo-exhibition “The world of Abai”.

We have 387 guests and no members online