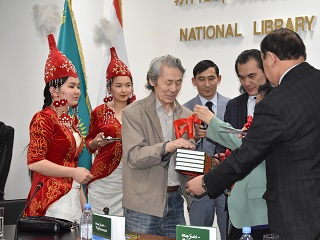 The activity was opened by the scientific secretary of National library of the RK, member of the Writers’ Union of Kazakhstan Zhunisbekov Bolat Zhunusbekovich and he gave the word to the moderator – journalist Zharkyn Salenuly.

There at the presentation spoke and shared their impressions about the collection “Zhyr besigi - Tarbagatai”: the winner of the international literary prize “Alash”, teacher, poetess Shamshabanu Khamzakyzy, the figure of culture of the RK, the poet Serik Akiramuly, deputy chairman of the board of the Writers’ Union of Kazakhstan, poet Bakyt Bedelkhan, the literature expert, candidate of science (philology), poet Adilgazy Kayirbekov and others.

And the singer, head of the department of the folk song from the Modern music and circus college after Zh.Elebekov Talgat Abugazy performed one song.

There in the activity participated the authors of the works published in the collection, the well-known poets, writers and figures, representatives of intelligentsia and mass-media.

We have 304 guests and no members online