Organized the book exhibition, “Tagzym zhane dank zhyly”dedicated to the 75-th anniversary of the Victory over fascism in the Great Patriotic war. 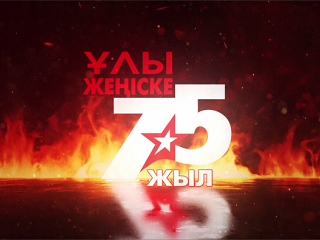 There in the reading hall of “Kazakstan kitaptary” is organized the book exhibition, “Tagzym zhane dank zhyly”dedicated to the 75-th anniversary of the Victory over fascism in the Great Patriotic war.

The Great Patriotic war began on June 22, 1941 when the fascist Germany by breaking the Soviet-German agreements of 1939, attacked the USSR. The war became a huge trial for all the peoples of the Soviet Union, including the Kazakh people.

The outstanding military leader, the hero of the war Bauyrzhan Momyshuly wrote: “The war became the breaking and turning point in the history of the Kazakh people too, leaving the ineffaceable trace in the hearts of the millions of our compatriots. “Kazakhstan in the Great Patriotic war” is the theme which remains noble and worrying not only in our time but for the future too“.

The Kazakhstanis actively and everywhere participated in the war as the citizens of the single country. Many went to the front as volunteers and found themselves in the very heat of the war: under Moscow, Stalingrad and the Kursk arch. There to the front went approximately 70 percent of the masculine population of the republic aged from 18 to 50 years old. The 1418 days of the Great Patriotic war became the most intense period in the history of the Soviet state, including Kazakhstan. The soldiers and officers not sparing their lives, defeated the fascists and attained the Great Victory over fascist Germany. The banner of Victory over the Reighstag was put by lieutenant R.Koshkarbayev, sergeant M.Egorov, junior sergeant M.Kantaria, P.Shcherbina, the soldiers G.Bulatov, I.Prygunov and N.Byk. The title of Hero of the Soviet Union was given to 497 Kazakhstanis.

The huge role Kazakhstan played in the provision of the front with military equipment, foodstuffs, clothing. There to the country were evacuated many plants and factories and it became the constant arsenal of the front. Almost all the enterprises turned over to the production of defense production. The main hardship in the rear were carried by the workers of the factories, kolkhozes, industrial enterprises. There in the hardest conditions dedicatedly worked the women, old people and children, providing the soldiers at the front with everything necessary.

On the occasion of the Victory Day in all the large cities of Kazakhstan will take place the holiday activities. There in the streets will take place the military parade of the technics, the equestrian procession, the ceremony of putting the flowers to the Eternal fire, the jubilee salute. There will be organized the concerts, the cultural-mass activities, the handing in of the jubilee medals, the exhibitions of pictures of the painters, of folk creative activity, the books of the times of the Great Patriotic war etc.

There at the book exhibition “Tagzym zhane dank zhyly” out of the fond of the National library of the RK are presented the materials about the events of the Great Patriotic war from 1939 to 1945, about the contribution of the Kazakhstanis to the common Victory, the participation of the Kazakhstani soldiers in the battles for the liberation of the territories captured by the fascists, the hardships in the life of the people in the rear etc.

We have 813 guests and no members online