Organized the book exhibition named “The wonderful world of the wonderful man', dedicated to the 160-th birthday of the great Russian writer, playwright Anton Pavlovich Chekhov. 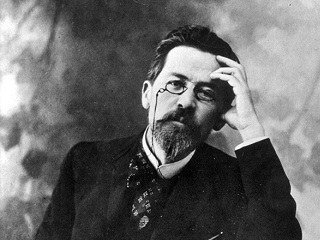 On January 29, 2020 there in the Hall of world literature is organized the book exhibition named “The wonderful world of the wonderful man', dedicated to the 160-th birthday of the great Russian writer, playwright Anton Pavlovich Chekhov.

He was born the family of the owner of a small groceries’ shop. The grandfather of Chekhov already in 1844 bought himself and his family out from the serfdom dependence and he did everything to make his children independent and free. There in the family towards the merchant businesses they didn’t show much vigour and more attention they paid to the mental development of the children and the public cares. The studying of Anton took place in the Greek school-gymnasium, into which the little Chekhov entered from the preparatory class in 1868. After that Anton Pavlovich started studying at the university of Moscow at the medical faculty, from which he graduated in 1884. After that he was preoccupied with doctor’s practice. During all the years of studying Chekhov had to find an additional work: he was the coacher, cooperated with the magazines, he wrote the short humorous stories.

The debut in print of Chekhov took place already at the first course of the institute, when the young writer sent to the “Dragonfly” magazine his short story and a humorous story.

The short stories of Chekhov were published for the first time as a book in 1884 (“The fairy-tales of Melpomena”). After that there in the biography of Chekhov was made a long trip to Sakhalin (April-December, 1890). There the writer studied the life of the exiles. The works of Chekhov “In exile”, “The island of Sakhalin”, “The ward №6” reflect his impressions about the trip.

After buying the Melikhovo estate, he leads public activity, helping the people (1892-1899). There in Melikhovo to Chekhov came the idea of the creation of a public library in his native Taganrog. He sacrificed for it more than 2 thousand books among which there were a lot of unique editions with the autographs of museum value and also made the gallery of portraits of figures of science and art. Afterwards Chekhov constantly sent to the library the books he bought in great quantities. At this time there were written many works among which there are: the plays of Chekhov “The cherry garden”, “The three sisters”, “The seagull”, “Uncle Vanya”. The staging of “The seagull” on the scene of the MHAT in 1898 became the deserved triumph of Chekhov – the dramaturgist.

Then due to the illness the biography of Anton Chekhov is replenished by still another transfer – to Yalta, where he is visited as guests by L.Tolstoi, A.Kuprin, I.Bunin, I.Levitan, M.Gorkiy.

“The cherry garden”, “The three sisters”, “The seagull” are staged in many theatres of the world during more than 100 years’ time. In more than 25 years of creative activity Chekhov created more than 500 different works (the short humoristic stories, the serious short novels and plays), many of which have become the classics of world literature.

There at the book exhibition out of the fond of National library of the RK are presented the works of the writer and the literature about him and his creative activity in different languages of the world.

We have 791 guests and no members online