Оrganized the book exhibition named “Peace, agreement and stability – the main asset of Kazakhstan” dedicated to the 80-th birthday of the Head of State, the First President of the RK. 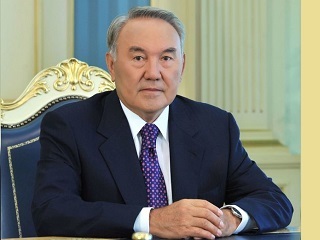 There in the reading hall of world literature is organized the book exhibition named “Peace, agreement and stability – the main asset of Kazakhstan” dedicated to the 80-th birthday of the Head of State, the First President of the Republic of Kazakhstan.

Nursultan Abishevich Nazarbayev is the large-scale personality of modern world history. He managed to take out Kazakhstan to the high international level by telling the whole world community about the peaceful, non-nuclear policy of the state.

During the years of independence under the leadership of the Elbasy there were implemented the economic, political and social reforms. The strategic thinking, the ability to foresee the course of history and the far-seeing, checked policy of Nursultan Nazarbayev provided for Kazakhstan the steady development on the poly-ethnical basis and thus moving him by rights into the number of the progressively thinking politicians of the world. Today the whole world speaks about the uniqueness of the model of public peace and concordance, calling it

“The Kazakhstani way” or “The model of Nazarbayev”. This experience evokes great interest of the politicians and scientists of the whole world. The ideas and initiatives of the President of Kazakhstan become the subject of deep researches, the leading mass-media and the leaders of the world powers speak and write about them.

Thanks to President N.Nazarbayev there was laid the steady foundation of partnership with foreign countries. In the course of many years the First President of Kazakhstan exerted a lot of efforts for the strengthening of friendship between countries. He made the invaluable contribution into the process of the global nuclear disarmament.

The strategic initiatives of the Elbasy are the programmes of development “Kazakhstan 2030”, “Kazakhstan 2050”, “The social modernization of Kazakhstan: Twenty steps towards the Society of Universal Labour”, “Mangilik el”, “The world. The XXI-st century”, “The look into future: modernization of public consciousness”, “The seven sides of the Great steppe” and others, and also the historical speeches connected with the announcement of the independence of Kazakhstan, the transfer of the capital to Akmola city (now – Nur-Sultan city), the inauguration speeches of the First President, the speeches at the forums and conferences of the world level – they are all the main beacons for the development of the Kazakhstani society. The Head of state N.Nazarbayev is the modern politician, the Leader of the new type, of the progressive mentality directed upon the implementation of the idea of modernization of the country.

Kazakhstan differs from some countries of the CIS in that there in the country are peace and stability and there is observed the economic growth. Kazakhstan can be the example of the state in which there peacefully co-exist different nations and where there in the ethnical variety one can see the welfare of the people.

There at the book exhibition out of the fond of National library of the RK are presented the works of N.A.Nazarbayev and the literature about him in the English, French, German, Persian, Turkish languages which disclose all the sides of the activity of N.A.Nazarbayev.

We have 379 guests and no members online