Took place the solemn opening of the Literary centre of Abai, dedicated to the 175-th birthday of the great Kazakh poet-enlightener and philosopher Abai Kunanbayev. 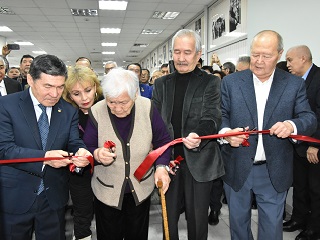 On January 16, 2020 at 11:00 hours there in the reading hall “Kazakstan kitaptary” took place the solemn opening of the Literary centre of Abai, dedicated to the 175-th birthday of the great Kazakh poet-enlightener and philosopher Abai Kunanbayev.

The purpose of the opening of the Literary centre of Abai is the wide popularization of the spiritual heritage of the founder and classic of Kazakh literature Abai Kunanbayev.

The literary centre is the permanently active exhibition if the works of Abai and editions about him from the fond of National library of the RK in open access: the materials about the life and creative activity, the works of the poet and the translations of his works into different languages of the world, the researches of the well-known Abai-study experts, philologists and writers, the electronic and note editions, the data-base of documents from periodical editions,

the gramophone records, the full collections of works of Abai. The fond of the Centre will be constantly replenished with new editions and materials.

The creation on the basis of National library of the RK as the main book depositary of the country , the informational centre, centre of culture and leasure time of the population, of the Literary centre of Abai is lawful and it opens wide possibilities for the organization of creative projects and multiple activities in the sphere of mass studying of the heritage and philosophy of Abai for all the citizens of the republic. Also there in the Centre will be created the conditions for the organization of the cycles of meetings with the well-known writers and poets, the thematical competitions and excursions, exhibitions of depictive art, loud readings for the knowledge of the works of Abai.

There at the opening of the Literary centre of Abai at National library of the RK were present the descendants of the great poet, the prominent public figures, the well-known writers, representatives of the Akimat of Almaty city, the student youth, readers of the library, mass-media and others.

The opening of the Centre gives a start of a great number of activities for the celebration of the 175-th jubilee of Abai at National library of the RK. The moderator was scientific secretary of National library of the RK, member of the Wroters’ Union of Kazakhstan Bolat Zhunisbekov. There took place the solemn ceremony of cutting the ribbon , there sounded the dedication (arnau) to the great poet Abai Kunanbayev peformed by the singer Talant Argyngali.

The honored figure of Kazakhstan Murat Auez in his speech narrated about the life and creative activity of Abai and his times “Zar zaman”. The well-known writer, honred figure of Kazakhstan Smagul Elubai expressed gratitude to the leadership of National library of the RK, noting that the poetry of Abai directed towards the Kazakh people is still topical even today.

The candidate of science (philology) Asyly Osman in her speech underlined the grandiloquence of the poet, his creative activity. The doctor of science in economy, academician Sabden Orazaly donated to the fond of National library of the RK his book “Abai as the future of Kazakhstan and the world civilization” published in English in London and offered within the framework of the 175-th birthday of the great poet to translate the works of Abai to other languages of the world.

The images of the young and the grown-up Abai were presented by the artistes of the Kazakh state academic theater of drama after M.Auezov and the Theatre of young spectator after G.Musrepov Zhalgas Tolganbai and Ernat Kunshibayev. There were performed by the folk singers Nurzhan Zhanpeisov and Sayat Nurgazin the songs for the verses of Abai Kunanbayev. The youth of National library of the RK read the verses of Abai in the Kazakh, Russian and English, Turkish languages. The librarian K.Kasymbekova acquainted the guests of the library with the book exhibition at the Literary centre of Abai.

We have 284 guests and no members online