Organized the exhibition dedicated to the centenary of the republican public-political newspaper “Kazakhstanskaya pravda”. 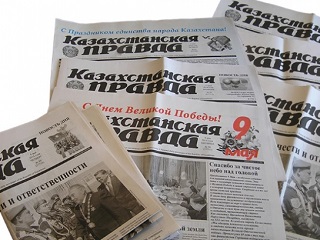 There in the reading hall of periodical editions of National library of the RK is organized the exhibition dedicated to the centenary of the republican public-political newspaper “Kazakhstanskaya pravda”.

There upon the pages of “Kazakhstanskaya pravda” are published the decrees and orders of the president of Kazakhstan, the parliament, the decrees of the government, the new laws of the republic, the messages about the changes in the higher organs of power.

After publishing in “Kazakhstanskaya Pravda” there enter into force the state documents. The newspaper highlights the most important events happening in the country and abroad.

The wide information about the situation in the regions of Kazakhstan, including the analytical materials on the problems which appear in society is delivered by its own correspondents. There in the address from the editorial office it was stated that “the first task of the edition is the inculcation of law in the region, the acts of the government directed upon the guiding of the life and activity of the population.” There was declared also the goal – “the gradual creation of the print organ, which would not be only the semi-official one but the one which expresses the needs and requests of the wide circle of people of the Kazakh region – the people’s newspaper”. There with the formation of the Kazakh ASSR there rose also the status of the newspaper, from July, 1921 it became the organ if the Republican Communist party and the Central Executive Committee. From 1923 it started being published six times a week. The original name was “The news of the Kirghiz region”, from 1921 – “The steppe truth”, from 1923 to 1932 the newspaper was published under the name of “The Soviet steppe”.

There by the decree of the III-rd Plenum of the Kazkraikom the newspaper was renamed into “Kazakhstanskaya pravda”. Under this name on January 21, 1932 there saw the light its first number.

There in the newspaper a deep trace was left by the talented journalists: Olga Berggolts; Pavel Kyznetsov – the well-known translator of Jambyl, and during the war years – the editor of the Panfilov division newspaper “For Motherland” and a special correspondent of “Pravda”; Pavel Rogozinskiy and Sergei Krushinskiy – after that the well-known Soviet publicists. From 1932 “Kazakhstanskaya Pravda” was published in Orenburg, Kyzylorda, Almaty. In 1999 there took place the transfer of the editorial office to the capital of Kazakhstan – Astana city.

On May 9, 1945 on the Victory Day there saw the light the urgent number of the newspaper “Kazakhstanskaya Pravda” dedicated to “The act of unconditional surrender of the German troops” and the Decree of the Presidium of the Supreme Soviet of the USSR about the announcement of May 9 the Holiday of Victory. The first editor of “The news of the Kirghiz region” was the member of the revolutionary committee Sedelnikov. After that he was replaced by the publicist well-known in those times A.M.Lezhava-Myurat.

The newspaper is spread in all the regions of Kazakhstan by the retail-price as well as by subscription. The circulation in 2019 was more than 100 000 copies.

Chief editor of the newspaper is Asyl Sagimbekov.

On March 23, 1958 there saw the light the 10-th thousandth number of “Kazakhstanskaya Pravda”. There by the Decree of the Presidium of the Supreme Soviet of the USSR the newspaper was awarded the order of the Labour Red Banner. During the Soviet years “Kazakhstanskaya Pravda” celebrated its 50-th anniversary and it was awarded the Honorary diploma of the Supreme Soviet of the Kazakh SSR.

There upon the exhibition are presented the materials from the fond of National library of the RK, the book and articles of well-known writers and journalists, public and political figures published upon the pages of the periodical press.

We invite everybody to the exhibition!

We have 440 guests and no members online