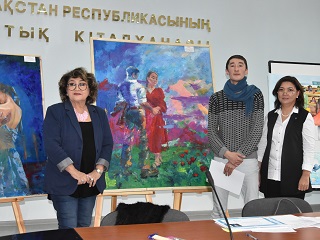 On November 29, 2019 at 14:00 there in the Hall of librarianship took place the summarization of results of the annual competition of literary creative activity for winning the prize after the people’s writer of Kazakhstan Azilkhan Nurshaikhov among the schoolchildren, students and masters of different colleges and universities of Kazakhstan.

There at the National library of the RK were summarized the results of the competition of the year 2019 in the sphere of artistic creative activity named “The world of the heroes of the novel of A.Nurshaikhov “The years of joy and love” among the students and school youth. The organizers of the competition were the members of the family of the Nurshaikhovs, the Service “Kazakstan kitaptary” of National library of the RK, the chair of lingual and generally educational preparation of foreigners of the faculty of pre-higher education of the Kazakh national university after Al-Farabi.

The purpose of the competition is the popularization of the creative activity of the writer, assistance for the disclosure of the creative potential of the youth and the upbringing of the culture of reading of the growing generation.

The activity was opened by deputy director for library work of National library of the RK A.Kh.Yussupova. There in the competition participated the students and master-degree students of the Kazakh national academy of arts after T.Zhurgenov, the Kazakh national agrarian university, the Kazakh national women’s pedagogical university, the Egyptian university of Islamic culture Nur-Mubarak, the KazGASA, the KazNU after Al-Farabi, the National scientific cardio-surgical centre of Nur-Sultan city, the college from Semei city and the pupils of the 10-th form of the secondary school after A.N.Bubentsov of the Enbekshikazakh district of the Almaty region.

There for the competition the participants presented the artistic works (the drawing, the water-colour, , the collage, the oil painting), which represent by themselves the illustrations to the novel of A.Nurshaikhov “The years of joy and love”. The idea and the problematics of the work had to correspond to the chosen textual fragment of the novel and transfer its deep meaning. There at the activity each participant of the competition told the present audience just what exactly he wanted to depict in his work and how he understands the text which he chose for the illustration.

There to the victors who won the prize places were handed the diplomas by the nomination “Depictive art” and the prizes after A.Nurshaikhov. The most interesting works will be placed in the Memorial cabinet of the writer at the National library of the RK.

The participants of the activity: the relations of the writer, the teachers, the students of the colleges and universities, readers, librarians and mass-media representatives.

There within the framework of the activity was organized the book exhibition named “Makhabbat pen meirimdilikti yuilestirgen kalamger” from the fond of National library of the RK, dedicated to the life and creative activity of the writer. The review around the book exhibition and the excursion around the Memorial cabinet of A.Nurshaikhov were done by the head of the Service “Kazakstan kitaptary” M.B.Zharknalova.

We have 298 guests and no members online