National library of the RK participated in the final activity of the library Internet-forum of the Krasnodar regional youth’s library after I.F.Waravva “The young hero in the literature of my country” 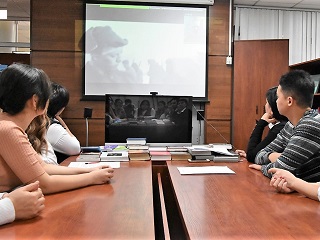 On November 26, 2019 at 15:00 hours National library of the RK participated in the final activity of the library Internet-forum of the Krasnodar regional youth’s library after I.F.Waravva “The young hero in the literature of my country” in which she took the First place in the creative competition of the video-rolls.

The concluding activity with the participants of the Internet-forum was in the regime of the online-conference. There in the meeting participated the young librarians and readers from Kazakhstan, Belarus and 37 municipal formations of the Krasnodar region, Russia.

The purpose of the library Internet-forum “The young hero in the literature of my country” was the integration of literatures of different peoples into the youth’s environment through the prism of the fates of the young literary heroes, the assistance for the strengthening of the friendly relations, the attraction of attention of the growing generation to the studying of culture and literature of different countries. The main stages of the Internet-forum were: the organization of the Day of international book; the creation of the corporate full-text data-base of fragments (excerpts) from the works of the national literatures, in which the main heroes are the young people; the carrying out of the creative competition of video-rolls and tales.

From the National library of Kazakhstan there in the Internet-forum participated the librarian from the Service of informational resources Dinara Aitbayeva in the nomination “My literary heroes, you are always with me”. By her was prepared the video-roll “The legendary son of the Kazakh people Bauyrzhan Momyshuly” – about the well-known Kazakh writer, the panfilovets, Hero of the Soviet Union. The video roll was also dedicated to the 75-th anniversary of the Victory in the Great Patriotic war.

There by the results of the Internet-forum in the nomination “My literary heroes, you are always with me” National library of the RK won the First prize place and is awarded by the memorable diploma and a valuable prize.

In the course of the final online activity the head of the Service “Kazakstan kitaptary” M.B.Zharknalova told the audience about the modern literature of Kazakhstan, about the creation of the video-roll – D.Aitbayeva, there the verses of Abai Kunanbayav and Zhambyl Zhabayev were read by specialist of the Service of restoration, conservation and binding Damir Zhurmanov and the student of the 2-nd course of the faculty “Art and culture” of the Kazakh national women’s pedagogical university Moldir Menlibayeva.

We have 292 guests and no members online