Took place the presentation of the collection of works in 12 volumes doctor of science (philology), professor Temirkhan Sakauly Tebegenov. 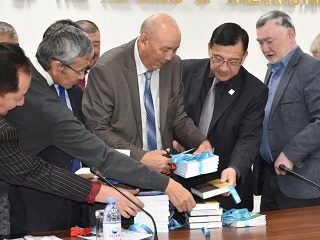 The activity was opened by scientific secretary of National library of the RK Bolat Zhunisbekov, who gave the word to the moderator, the writer, the winner of the International literary prize “Alash” Nagashybek Kapalbekuly.

There in the presentation participated doctor of science (economics), academician, writer, major-general of the UNO, chairman of the International Kazakh creative association “The planet of peace” Aben Nurmanov, the winner of the International literary prize “Alash”, doctor of science (philology), writer Nurdaulet Akysh, poet, candidate of science (philology), director of the State literary-memorial museum complex of S.Mukanov and G.Musrepov Adilkazy Kairbekov and other representatives of creative intelligentsia who congratulated the jubilee. There within the framework of the activity was organized the book exhibition out of the Fond of National library of the RK, dedicated to the life and creative activity of Temirkhan Sakauly Tebegenov.

There in the activity participated the well-known public figures, writers, poets, students, readers of the library and mass-media representatives.

We have 393 guests and no members online