Place the republican scientific-theoretical conference by the theme «The written reform: spiritual renovation and historical continuity», dedicated to the 125-th birthday of the outstanding scientist, state figure T.Shonanov. 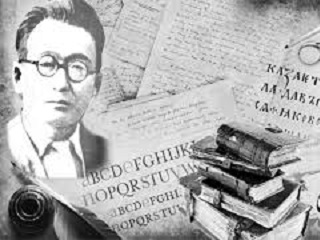 On November 15, 2019 at 11:00 hours there in the Hall after N.Dauletova will take place the republican scientific-theoretical conference by the theme «The written reform: spiritual renovation and historical continuity», dedicated to the 125-th birthday of the outstanding scientist, pedagogue, translator, state figure Telzhan Shonanov.

The activity was opened by scientific secretary of National library Zhunisbekov Bolat Zhunisbekovich.

The moderator of the activity was deputy director of the Institute of linguistics after A.Baitursynov, candidate of science (philology), assistant professor Kulmanov Sarsenbai Kuantaevich.

There at the activity made the reports and spoke the Kazakhstani scientists the professors: M.Koigeldiyev, A.Ismakova, Zh.Baltabayeva, A.Salkynbai, M.Bekarystan, M.Zhylysbayeva and others. During the conference there was shown an excerpt from the documentary film about T.Shonanov, shot by cinema director E.Rakishev.

Shonanov Telzhan was born in 1894, the date of death – February 27, 1938, the Kazakh linguist, societal specialist.

He was born in the aul №4 which entered into the Irghiz district of the Aktyubinsk region in the family of a peasant. He had higher education. In 1918 he joined the Alash-Orda movement, in 1919 he turned over to the Soviet positions. He worked in the organs of enlightenment in Semipalatinsk, after that in Orenburg. In 1921 he was arrested for «anti-Soviet nationalistic activity», he spent several months under the inquest, in 1922 he was released. From the end of the 1920-s of the last century up to the arrest he was assistant-professor at the chair of the Kazakh language at the Kazakh pedagogical institute. He is the author of a number of textbooks and scientific works, he was one of the first creators of the Kazakh terminology.

In July, 1937 he was arrested, on February 27, 1938 he was sentenced to death and that very day shot. On August 13, 1990 there came out the conclusion, on the basis of which on September 18, 1992 Shonanov was rehabilitated due to the lack of the crime committed.

Telzhan Shonanov is the well-known scientist who wrote the works in several spheres of linguistics, the works about the Kazakh alphabet, orthography, terminology, grammatics, stylistics and textology, on the issues of region-study, geography, settlement of the Kazakhs, the settlements, the distribution of land.

The organizers of the activity are National library of the Republic of Kazakhstan and the Institute of linguistics after A.Baitursynov.

There within the framkework of the activity was organized the book exhibition out of the fond of Rare books and manuscripts of National library of the RK, dedicated to the life and creative activity of T.Shonanov by the theme «The scientific heritage of T.Shonanov» and also there was the presentation of the 5-volume collection of works of Telzhan Shonanov.

There in the activity participated the well-known scientists, researchers, teachers and students of the colleges and universities, the schoolchildren of Almaty city, readers of the libraries.

We have 491 guests and no members online