Тook place the Almatinskiy city competition of book readers “The three strings of my soul…” dedicated to the 85-th birthday of the well-known Kazakhstani writer G.K Belger. 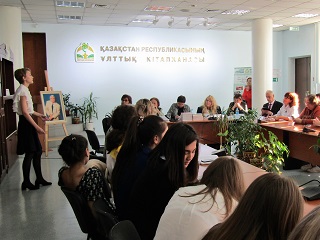 On November 1, 2019 at 10:00 hours there in the Hall of library study took place the Almatinskiy city competition of book readers “The three strings of my soul…” dedicated to the 85-th birthday of the well-known Kazakhstani writer Gerold Karlovich Belger.

Gerold Belger is the writer from the big letter, who equally well knew the native German, the Kazakh and the Russian languages. The translator, prosaic, publicist, literary expert. The author of multiple novels, short novels and literary-critical works.

The organizers of the activity: National library of the Republic of Kazakhstan, The republican informational-methodological journal “The open school”, the Republican public association “The council of Germans Wiedergeburt”. The management for the carrying out of the competition was implemented by the Organizing committee formed from librarians, pedagogies, figures of art and culture, public figures and the members of the family of G.K.Belger.

The purpose of the competition of readers is the acquaintance of the pupils with the multi-sided creative activity of G.K.Belger within the aspect of the traditions and values of the multicultural and multi-lingual society in Kazakhstan.

The competition was carried out by three nominations: the novels, short stories and other works of G.K.Belger, his translations and essays written by the writer in different years. The performances of the children were evaluated by the jury into which there entered the spouse and the daughter of the writer R.Z.Khismatullin, I.G.Kovaleva, the literary editor of the National republican newspaper “Deutsche Allgemeine Zeitung” (DAZ) L.G.Gordeyeva, the teacher of the Russian language and literature R.E.Abkeyeva, from the National library of the RK the heads of the Publishing service L.A.Egorycheva and the Service “Kazakstan kitaptary” M.B.Zharknalova.

The participants of the competition of readers were the pupils of the senior classes of 15 schools of Almaty city. All the participants were preparing the excerpts from the works of different genres of G.K.Belger written in the Kazakh, German and Russian languages. They not only expressively and by heart read the excerpts from the works of G.K.Belger but tried to brightly and figuratively disclose their feelings, thoughts and emotions. But despite the agitation and the competition, all the participants of the competition received the diplomas and the letters of gratitude. The winners who excelled especially were given as gifts the books of G.Belger.

There within the activity out of the fond of the National library of the RK was organized the book exhibition dedicated to the life and creative activity of G.K.Belger, his works, his articles on the pages of the periodical press and the recollections about him, and also carried out the excursion around the memorial cabinet. At the end of the activity the family of G.Belger expressed their gratitude to all the organizers of the competition and demonstrated the video-roll about the life and activity of the writer prepared by the daughter of the writer I.G.Kovaleva.

We have 485 guests and no members online