Took place the creative evening of the public figure, cinema actor Nurlybai Esimgaliyev and the presentation of his book “Shandykol aspany”. 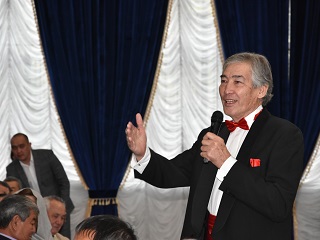 On October 25, 2019 there in the hall after N.Dauletova of the National library of the RK of the Ministry of culture and sport of the RK took place the creative evening of the public figure, cinema actor Nurlybai Esimgaliyev and the presentation of his book “Shandykol aspany”.

The presentation began with the performance of the State academic orchestra of folk instruments after Kurmangazy. The moderator of the activity – the singer, figure of culture of the RK Turaliyev Turarbek greeted the people gathered and gave the word to the scientific secretary of National library of the RK Zhunisbekov Bolat Zhunisbekuly.

There with the report about the creative way of the jubilee N.Esimgaliyev spoke the poet Bolat Zhetekbai, after that there was shown an excerpt from the role of the actor in cinema.

There at the creative evening the honour of cutting the ribbon of the book by Nurlybai Esimgaliyev “Shandykol aspany” was given to the writer, cinema director, chairman of the Union of cinematographists of the RK Ermek Tursunov, and the actor, producer, the honored figure of the RK, president of the cinema-studio “Kazakhfilm” after Sh.Aimanov Arman Asenov and also to the councilor of the deputy akim of Almaty city Daniyar Aliev.

There in the activity participated the readers of the library, students, representatives of intelligentsia and the mass-media.

We have 243 guests and no members online