Scientific-practical conference by the theme “The role and the spiritual heritage of T.Ryskulov in the development of the economy  and culture of Kazakhstan” 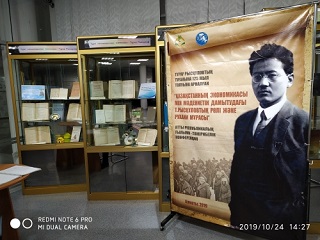 On October 25, 2019 at 11:00 hours there in the Hall after N.Dauletova took place the republican scientific-practical conference by the theme “The role and the spiritual heritage of T.Ryskulov in the development of the economy  and culture of Kazakhstan”, dedicated to the 125-th birthday of the outstanding Kazakh state figure.

The moderator at the activity was deputy director for science of the Institute of history and ethnology after Ch.Ualikhanov, the doctor of science (pedagogics), professor Borbasov Sayin Moldagaliyevich.

Turar Ryskulov is the outstanding scientist and state figure of the XX-th century, one of the founders of the idea of independence of Kazakhstan, and who made a contribution into

the social and econo0mic development of the country, preservation of the spiritual unity and revival of the culture of the Turkic peoples.

Turar Ryskulov was born on December 26, 1894 in the Eastern-Talgar volost of the Vernensk uyezd of the Semirechensk region in the ravine of Besagash (today – the Talgar district of the Almaty region). In 1907-1910 he studied at the Merke Russian-Kazakh boarding-school. Om 1914 he finished the Pishpek agricultural school. In 1916-1917 he was studying at the Tashkent pedagogical institute. A member of the national-liberation revolt of the peoples of Central Asia in 1916. In 1917 he organized the society “Bukhara” (The revolutionary union of the Kazakh youth) in Merke. T.Ryskulov enjoyed great authority among the people. He can be said to have been one of the most prominent and influential leaders in Central Asia.

As the outstanding organizer and leader of the large scale T.Ryskulov for the first time brightly manifested himself during the terrible famine which broke out in the Turkestan region in 1918-1919 as the consequence of the revolution and the civil war. In those severe years the Central commission for the fight with the famine under the chairmanship of T.Ryskulov saved from

the inevitable death more than one million of Moslems of Turkestan. This historical feat of T.Ryskulov is still highly esteemed in the memory of the peoples of Central Asia.

There by the initiative of T.Ryskulov in Kazakhstan was built the Turkestani-Siberian railroad (the Turksib), there appeared the mighty industrial centres – the coal-producing  and metallurgical complexes of Karaganda, the ferrous metallurgy of Eastern and Southern Kazakhstan, the oil-gas industry in Western Kazakhstan. There on the territory of Kazakhstan and Central Asia were organized the large national preserves of the All-Union importance. T.Ryskulov stood at the sources of opening in Kazakhstan of the higher and special technical education.

The organizers of the activity are National library of the Republic of Kazakhstan, the Institute of history and ethnography after Ch.Ualikhanov.

There within the framework of the activity was organized the book exhibition out of the fond of National library of the RK, presenting the materials about the life, creative activity and activity of T.Ryskulov.

There in the activity participated: the public figures, writers, teachers of colleges and universities, the students of the military unit on Burundai, students, librarians of Almaty city and the Almaty region, mass-media representatives.

We have 278 guests and no members online