There in the reading hall of the Service of world literature is organized the book exhibition, dedicated to the 175-th birthday of the German philosopher, composer and poet Friedrich Nietzsche. 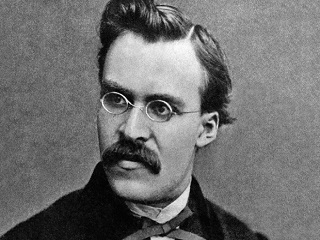 There in the reading hall of the Service of world literature is organized the book exhibition, dedicated to the 175-th birthday of the German philosopher, composer and poet Friedrich Nietzsche.

Friedrich Nietzsche is the German thinker, poet, creator of the unique philosophical teaching. He was born in 1844 in Rekken not far from Leipzig, Saxonia province within Prussia in the family of the Lutheran pastor. In 1858 he went to study to the famous gymnasium “Pforta”. There he became interested in studying the antique texts, and tried to write for the first time. In October, 1962 he went to the Bonn university, where he started studying theology and philology. But even at the new place the studying of philology didn’t bring to Nietzsche satisfaction, regardless of the excellent success in this affair: already at the age of 24 while still being a student, he was invited to the post of professor of classical philology to the Bazel university.

Being the classical philologist by education, Nietzsche paid great attention to the style of of maintaining and narrating his philosophy, thus winning for himself the fame of an outstanding stylist. The philosophy of Nietzsche is organized into a system, the will to which he deemed to be a demerit of honesty. The most significant form of his philosophy are the aphorisms which express the fixed movement of the state and thought of the author, being in constant formation.

In his philosophy Nietzsche was developing the new attitude to reality, built upon the metaphysics “of everyday formation”, but not of the given reality and constancy.

The main works of his are: ”The birth of the tragedy or Hellenism and pessimism”, “The untimely reflections”, “About the use and harm of history for life”, “Schopenhauer as the educator”, “Human too human. The book for free minds” and many others.

We have 268 guests and no members online