Presentation of the book by the director, scenario-writer Tamara Mukanova named “The golden-backed Altai with the smell of juniper” 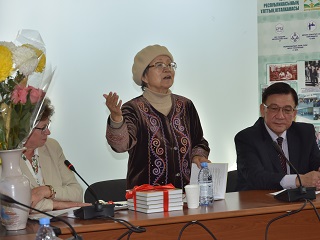 The moderator of the activity was assistant-professor of the chair “History and theory of cinema” of the Kazakh National academy of arts after T.K.Zhurgenov Nadezhda Nikolayevna Berkova.

Also the author of the book was congratulated by the pupils of Tamar Mukanova, who thanked their mentors, expressing their best and warm wishes.                  There in the activity participated the representatives of intelligentsia and the students of Almaty city.

We have 522 guests and no members online