Тook place the meeting with the first woman-ambassador of independent Kazakhstan, the first Permanent Representative of the Republic of Kazakhstan at the United Nations’ Organization Akmaral Khaidarovna Arystanbekona. 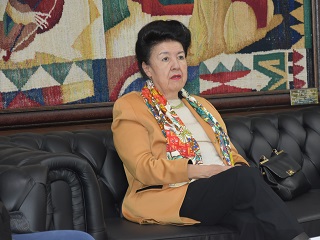 On September 25, 2019 at 16:00 hours there in the Hall after N.Dauletova within the framework of implementation of the programme article of the Head of state “The seven faucets of the Great steppe” took place the meeting with the first woman-ambassador of independent Kazakhstan, the first Permanent Representative of the Republic of Kazakhstan at the United Nations’ Organization Akmaral Khaidarovna Arystanbekona.

Akmaral Khaidarovna Arystanbekona is the doctor of science (history), professor, Ambassador on special assignments of the MFA of the RK. Her activity was always directed at the strengthening of independence of the young state. A.Kh.Arystanbekona began her international labour activity as Deputy Chairwoman of the Presidium of the Kazakh society of friendship and cultural relations with foreign countries at the House of Friendship which she headed.

During the substantial conversation Akmaral Khaidarovna told the audience about the history of entering of Kazakhstan to the membership of the UNO, about the preparation and her own speech at the 46-th session of the General Assembly on behalf of Kazakhstan. There was demonstrated the historical video, in which the guests of the meeting could see the solemn ceremony of raising the flag of Kazakhstan before the head-quarters of the organization. There at the meeting the students of the KazNU after Al-Farabi asked the questions about the international activity of the UNO and the choice of her way in life which Akmaral Khaidarovna answered with pleasure and expressed the parting words to the younger generation.

During the format of the meeting there was organized the book exhibition “Kazaktan shykkan tungysh elshi aiyel” from the fond of National library of the RK, which presented the materials about the life and activity, her monographs and publications on the pages of the periodical press.

There in the meeting participated the students of the KazNU after Al-Farabi, the workers of the Centralized library system of Almaty city and the readers of the library.

We have 208 guests and no members online