Assembly of Eurasia «The book in the formation of the intellectual culture of the people» and in the XXIII-rd General meeting of the members of the LAE. 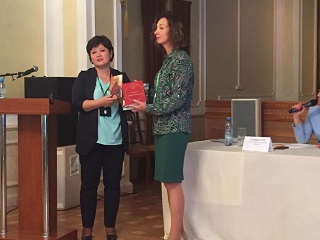 Several days ago deputy director for informational technologies and innovations of National library of the Republic of Kazakhstan Iskaliyeva N.A. participated in the conference of the Library Assembly of Eurasia «The book in the formation of the intellectual culture of the people» and in the XXIII-rd General meeting of the members of the LAE. The activities are timed to the jubilee of the city, and also on the occasion of giving to Brest city of the status «The cultural capital of the commonwealth of 2019».

There at the conference Iskaliyeva N.A. spoke with the report named «The book as memory and message to the progeny» (the informational resources of the National library of the Republic of Kazakhstan about the Second world war). There was donated to the National library of Belarus the complement of books by the project «The modern Kazakhstani culture in the global world». The library fond of the Brest central city library after A.S.Pushkin also was replenished with the Kazakhstani editions.

There at the XXIII-rd General meeting of the members of the LAE were discussed the issues of the preparation of the model recommendation for the establishment of the single approaches in the issue of legal deposit in electronic form. The participants of the meeting approved the proposition of the councilor of the Board of directors of the RSL Sakharov N.A. to create the expert council and the interstate working group for the elaboration of the model recommendation.

There by the decision of the Council of the heads of state of the CIS the year 2020 is announced to be the Year of the 75-th year of the Victory in the Great Patriotic war in 1941-1945. The participants discussed the conception of the film dedicated to the activity of the libraries of the CIS during the years of the war.

There for the participants of the conference was organized the excursion around the Brest fortress. Today «The Brest hero-fortress» is the largest monument on the post-Soviet space to the courage of the Soviet people during the years of the Great Patriotic war.

We have 806 guests and no members online