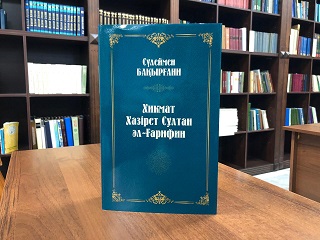 Another masterpiece from the fond of rare books and manuscripts of the National library of the Republic of Kazakhstan became accessible for reading to the wide circle of domestic readers.

This is the heritage of Suleiman Bakyrgani “Khikmat Khazret Sultan Al-Garifin”, which on accordance with the decision of the Committee of the world cultural and natural heritage of UNESCO was entered into the list of manuscripts that entered the register of “The world heritage” in 2003.

Chief editor is director of National library of the RK Ospanova B.K. The transcription is by Mukhamedrakhym Zharmukhamedov and Maksut Shafagi. The book was published by the publishing house “The Kazakh encyclopaedia”, director Toibayeva Zhadyra Nurbayevna.

We have 284 guests and no members online