Took place the ceremony of acquaintance with the book by Kari Zholdybike Nusipkyzy named “My father’s dream”. 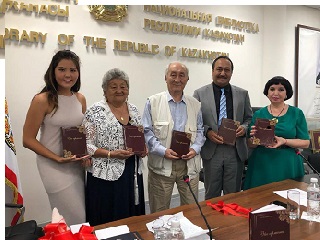 On August 22, 2019 there at the National library of the RK in the hall after N.Dauletova took place the ceremony of acquaintance with the book by Kari Zholdybike Nusipkyzy named “My father’s dream”.

The moderator at the activity was the honored worker of the RK, winner of “Daryn” prize, actor Esenaliyev  Baigali Makulbekuly.

The activity was opened by the word of greeting by director of National library of the RK Ospanova Bakytzhamal Kairbekovna, expressed gratitude to Kari Zholdybike Nusipkyzy who had worked at the National library for many years and awarded her with the badge “Excellent library worker”. At the same time she awarded valuable gifts to the grandchildren of Zholdybike Nusipkyzy.

There at the activity were present the representatives of the intelligentsia, the workers of

We have 158 guests and no members online