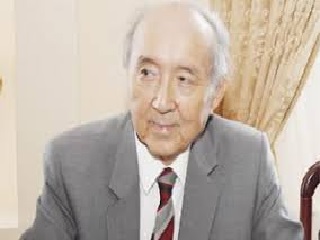 There in the reading hall “Kazakhstan kitaptary” is organized the book exhibition named “Karymdy kalamger, zerdeli galym”, dedicated to the 90-th birthday of the well-known scientist, literary expert, writer, honored figure of culture of Kazakhstan, the winner of the State prize of Kazakhstan Sheriazdan Rustemovich Eleukenov.

Eleukenov Sheriazdan Rustemovich was born on September 3, 1929 in the village of Arshaly of the Ulan district of the Eastern-Kazakhstani region. In 1951 he graduated with honores from the department of journalistics of the faculty of philology of the Kazakh state university after S.M.Kirov (now the Kazakh tate university after al-Farabi).

The works of Sh.Eleukenov are dedicated to the history of Kazakh literature, the history and theory of the Kazakh novel, the problems of Magzhan study, book study and journalistics. He writes the propagandistic articles, reviews for films, literary works, essays, satirical articles, stories and essays, short novels and novels, among which there areetc.

Sh.Eleukenov is the honored worker of culture of the Kazakh SSR (1981). The winner of the State prize of Kazakhstan (1998) and the international prize after M.Zhumabayev of the Kazakh Pen-club (2001). He is awarded with the orders “Kurmet belgisy”, “Parasat” (2009), medals and Honorary certificates.

There at the book exhibition “Karymdy kalamger, zerdeli galym” out of the fond of National library of the RK are presented the materials about the life and activity of the scientist Sh.Eleukenov, his scientific works, his works and articles on the pages of the periodical press.

We have 460 guests and no members online