The presentation of the discussion club of the Kazakh language “MAMILE”.

On July 24, 2019 there in the hall after N.Dauletova took place the presentation of the discussion club of the Kazakh language “MAMILE”. 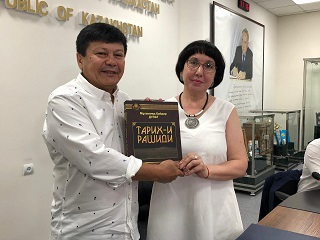 The activity was opened by director of National library of the RK Ospanova Bakytzhamal Kayirbekovna who congratulated the director of the club “MAMILE” Kanat Galymuly with then 60-th jubilee and handed to him the letter of thanks and the memorable gift.

The director of the club “MAMILE” Kanat Galymuly narrated about the work of the club, the purpose of which is the explanation of the spiritual values of the Kazakh people through the studying of the Kazakh language , the nearing and cooperation of the representatives of all the nationalities, the heightening of trust towards each other. At the present time the club works in the cities of Nur-Sultan, Almaty, Karaganda, Pavlodar, Taldykorgan.

The participants of the activity were given the book named “Situational Kazakh” which is the methodological base for everyday work of the clubs.

We have 285 guests and no members online