Meeting with writer and Professor of English Brenda Flanagan.

On June 12, 2019 there in the hall after N.Dauletova took place the creative meeting with the writer and professor of the English language from Davidson college from the state of North Carolina – Brenda Flanagan. 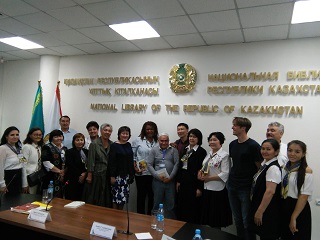 She is known in the whole world with the unusual theatricalized presentations of her short stories and verses. At the present time she teaches the writer’s mastery, the Caribbean and Afro-American literature in Davidson college from the state of North Carolina.

Born in Trinidad, she won many awards for her writings and dramatic works in the United States. Brenda Flanagan received the doctor’s degree in the Michigan university in Ann-Arbour and works at the Department of state of the USA as ambassador of culture. Professor Flanagan visited such countries like Brazil, Saudi Arabia, Chile, Kuwait, Tunis, Morocco, the Czech Republic, India, Chad, Panama. She also was in Tajikistan, Turkmenistan and Kazakhstan.

The activity was opened by deputy director of National library of the RK A.Kh.Yussupova. The moderator of the activity was Asiyat Suleimenova – the coordinator of  the Fulbright programmes from the Embassy of the United States in the RK. The creative meeting took place in a very friendly and warm atmosphere. The readers, guests, students from the universities and colleges and the workers of the library listened with pleasure and real interest the emotional poetical, a little theatricalized works of the Afro-American authors which Brenda Flanagan read about the revolution, national pride, friendship and love which were splendidly translated by the synchronous interpreter Nurlan Medetbekov. The guests asked questions about the life and creative activity of the writer, the new trends of the literary genre of the Afro-American authors which she joyfully answered. Brenda Flanagan put her autographs upon her books from the fond of National library of the RK with the wishes of prosperity and welfare to Kazakhstani readers.

We have 255 guests and no members online