There in the reading hall of the Arts’ department is organized the book exhibition named “Zhyrshylyk oner zhuirigi” dedicated to the 125-th birthday of the folk singer and poet Sugur Begendikov (1894-1974). 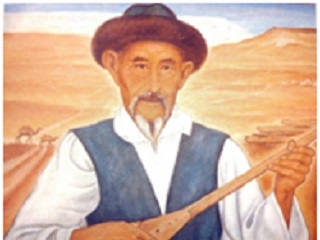 Sugur Begendikov was born in 1894 in Mangystau city. Sugur’s father was a religious man and twice made the hadj to Mecca. Sugur in his childhood studied with the mullahs for nine years. The universal fame came to Sugur when he was 27 years old at the commemorative feast for Ali Tauan.

Many well-known musicians and narrators were performing at the lunch before the public, each in a separate yurta set specially for him. But after some time the people started coming to the place where Sugur was singing. In the ends the gathered people lifted the six-rope yurta and put it aside, so that the jyrau turned out to be on the open site before the crowd of two thousand people. The people around Sugur didn’t accept Soviet power and resisted it with the arms in hand, and in the 1920s-1930s there started the departure of the Adai clans from Mangystau. But still the zhyrau longed for Mangystau. At the same time life in Turkmenia was not easy. Sugur like all the others had to take any job, for instance to gather cotton. For the traditional Kazakhs  who deemed it a humiliation to walk, it was hard not only physically but also morally as well. Sugur dreamed to return to Mangystau. And he implemented the dream in 1968. Created while he was parting with the people of Khoresm the terme “Arrival of Sugur to the aul” depicts the ideal world of Kazakh traditional culture. The singer-zhyrau who was already over 70 years old imagines how splendidly he comes back to the village on native land, how  joyfully he is met by the older relations, how their beautiful wives ask him coquettishly to sing again and again, how the young people are galloping in the steppe telling the joyful news about the arrival of the famous zhyrau, calling the neighbors to come to his performance, how the young married girls ashamed to come near to the musicians try to see the rare guest from afar, how the people prepare for him the best yurta, how the rich table full of viands is prepared  for him, how the girls hoping to get his blessing pour tea for him because the singer would  sing all through the night till the dawn only sometimes sipping from the cup to moisten his throat. Not only the public missed Sugur but he himself longed for them and his native land of Mangystau.

There at the book exhibition are presented the materials about the life and creative activity of Sugur Begendikov from the fond of grammophone records, the book, music and periodical editions of National library of the RK.

We have 218 guests and no members online