There in the hall for scientific workers after U.M.Sultangazin is organized the book exhibition dedicated to the 90-th birthday of the metallurgist, doctor of science (technology), professor, academician of the Academy of sciences of the Kazakh SSR Askar Mendiakhmetovich Kunayev. 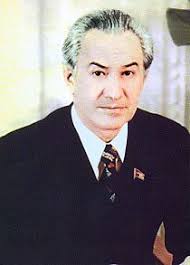 Askar Mendiakhmetovich Kunayev was born on July 14, 1929 in Almaty city. In 1951 he graduated from the Moscow state institute of steel and alloys. The steel-smelter, master, head of shift at the Temirtau metallurgical factory (1951-1953), senior laboratory worker, junior then senior scientific worker, head of laboratory (1953-1970), director of the Institute of metallurgy and enrichment of the AS of the KazSSR from 1970, vice-president (1972-1974), president of the AS of KazSSR (1974-1986).

Under the leadership of A.M.Kunayev there for the first time in domestic practice were elaborated the theoretical basics of mercury-free hallam technology of reception from the semi-products of processing of the nefelines and boxites . There by this technology at the present time is organized the large production of hallium at a number of enterprises of the country.

During the time of scientific activity A.M.Kunayev executed 335 scientific works, including the monographs “The pyro-hydrometallurgical ways of processing vanadium raw material of Kazakhstan”, “The cyclone smelting” etc. He is the author of 67 inventions and 6 patents.

Askar Kunayev died on March 31, 1999 in Almaty city. There at the book exhibition are presented the materials about the life and activity of the scientist, his scientific works, articles on the pages of the periodical; press and

the recollections of the compatriots.

We have 717 guests and no members online